Difference between revisions of "Pirate Factory" 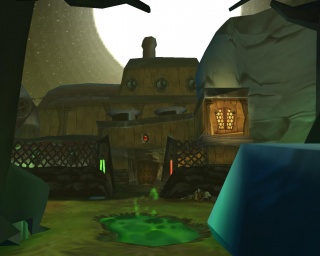 The Pirate Factory, as seen in Rayman Revolution 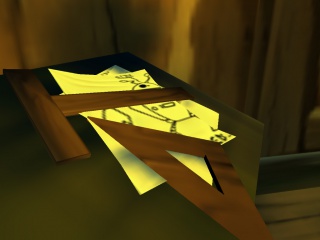 A diagram of the Grolgoth

The Pirate Factory is a location in Rayman Revolution, situated in Rainbow Creek. It serves as the entrance to the the Lava Sanctuary. The Factory is located in a smelly, old swamp, infested with Zombie Henchmen.

Rayman only needs to make one major visit to the factory in the game, but it is a long and important one. His incentive to go there begins as soon as he reaches the Rainbow Creek, as it is where the entrance to the Lava Sanctuary lies. However, it is protected by a force field, that can only be deactivated by destroying two generators, one in the Echoing Caves and one in the Precipice. Each generator is guarded by a Ninja Henchman, however it is not necessary to defeat them in order to destroy the generator.

When Rayman deactivates the force field, he enters the factory itself, where he rescues Bimbette from Boss Biditank, before entering the Lava Sanctuary.