Poor Little Daisy is the seventh and last level of the Ticklish Temples, a world in Rayman Origins. This level consists of a boss battle against Carnivora, the first of the Four Kings that were turned into monsters that Rayman and the team of heroes must defeat in order to make them normal again. This is the fifth level from this world and eighth overall that is included in the Back to Origins mode in Rayman Legends.

The boss battle begins shortly into the level, with Rayman and his team having to stay ahead of Carnivora as he chases them. The team must move quickly up a vertical passage while Carnivora follows, using platforms like nenuphars and Platformmen to go up. At times, Carnivora will stop and roar several times, causing platforms to crumble, and then start moving upwards again at an even faster speed. The first Skull Coin of the level can be found by going right on an open passage next to a vine. The second Skull Coin can be found by going to the left of also the second Lum King near by Darkroots. After a bit, Rayman and his friends must move to the right and avoid the now walking Carnivora. This only lasts a short time before Carnivora stops at a passage too narrow for her. 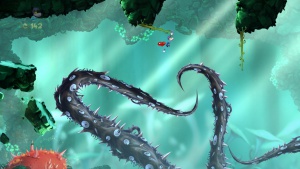 Carnivora can be seen below the group of Darkroots. 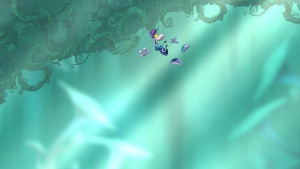 Rayman falls down to the room where the actual battle takes place.

In the next section, Rayman and the team must avoid Darkroots for a short ways before falling into a room with Carnivora. This is where the actual battle takes place. Carnivora will come forward, and the gang must run up the walls to get out of the way. Carnivora will then hit her head on the wall, causing a Bubo to grow. After a player hits this, Carnivora will then get on the ceiling and hit her head against the floor. She will do this several times, during which the players must run under Carnivora in between his attacks. After hitting the floor several times, Carnivora will release her grip on the ceiling, laying there on her head while a Bubo forms on her underside. After hitting this Bubo, Carnivora will flip over and jump several times, during which the team must run underneath to avoid getting hurt. Then, Carnivora will shoot her long tongue forward across the room, showing a Bubo in her mouth. The heroes must run up the tongue and hit the Bubo to defeat Carnivora, who will return to her normal self to end the level. The team will then pose on the photoboard as the Magician waits for the amount of Lums that were collected.

In the Back to Origins version, there aren't many differences between the original version; except of the notable elements from Rayman Legends replacing some of the elements from Origins. One difference is shown after Carnivora is defeated; when he is, he won't say anything, and naturally no dialogue box will show.