Punching Plateaus is the fourth level of the Jibberish Jungle, the first world in Rayman Origins. This area was formerly known as Way Of The Fist. As the name implies, attacking plays an important role in this level, as the world is filled with multiple breakable walls and enemies in comparison with previous levels. 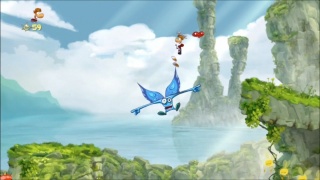 The Magician is seen at the start of the level on the left again and will tell the players about Bulb-o-Lums, charging their attacks, and ground pounding if they attack or jump on his hat. Afterwards the players can continue through the level defeating Lividstones and avoiding dangerous waters containing tentacle claws. Platformman also makes his first appearance in this area. The first Skull Coin is hidden on a small cave with plants, under the cliff with the Lividstone standing on a nenuphar next to a green bulb. To get it, the player must fall and make contact with the right wall, to finally perform a wall jump and get into the cave. Then, the player can go back by using a regular walljump. 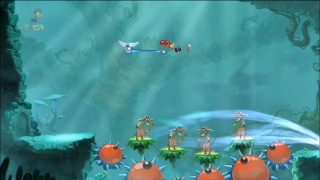 Similar to the first area where the team must defeat Lividstones and avoid dangerous waters. Even though an Electoon can be heard crying for help it is not in this area. The second Scull Coin can be found here, hidden inside of a Bulb-o-Lum next to the swingman. When the player hits the bulb, a bubble containing the coin will come out and situate right in the other side of the water, the player must get the coin quickly before the bubble explodes, avoiding the tentacle claw. The third Scull Coin can be obtained after hitting the bomb bulb and performing a wall jump on the upper area. 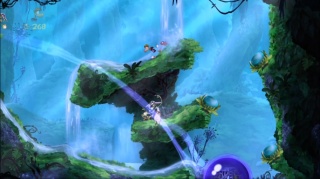 The team must now use their combined skills of jumping and attacking in order to defeat Lividstones and avoid falling into dangerous waters or bottomless pits. Several spiky flowers guard two Skull Coins in this area. To get the fourth one, the player must hit a green bulb to activate two nenuphars and jump on them; right after getting the skull coin, the player must hit the blue bulb quickly to make the spiky flowers below disappear. The fifth one is right between two spiky flowers; the player must use a bumper flower to get it.