Difference between revisions of "Purple Lum"

A detailed view of a Purple Lum without the ring.

A Purple Lum is one of the many types of Lums that are found in the Glade of Dreams. These Lums carry a ring and assure the cohesion of the world; without them, nothing would be solid or visible. Unlike the other Lums, they are not collectible. Because of their ring, they can be grabbed and used as a hook by Rayman, so that he may cross large areas without touching the ground. Like Super Yellow Lums, Purple Lums have eyes.

They fulfill the same role as the flying rings from the original Rayman game. The console versions of Rayman 3 replace the Purple Lum with the flying hook, which can only be tethered onto with the LockJaw. Rayman Origins and Rayman Legends use various means to replicate the swinging motif, such as Swingmen, lianas, ropes, chains and even bearded Fakirs.

Purple Lums assure the cohesion of the world. Without them, nothing would be solid or visible. With your magic fist, you can jump through the air and grab them one after another.
—The Knowledge of the World, Rayman 2

By shooting them, Rayman can grab onto them and swing from one to another, thereby crossing vast areas without touching the ground.
—Manual, Rayman 2

Rayman 2 is the first game in which Purple Lums appear. Rayman gains the ability to swing from Purple Lums by absorbing a Silver Lum which is granted to him by Ly, after he freed her from her prison in the Fairy Glade.

According to the Knowledge of the World, Purple Lums are one of the five primary coloured Lum types that are used in the world. They are said to give cohesion to the world and that nothing would be solid or visible if they didn't exist. Rayman is able to use these Lums by shooting at them, once the shot has met the Purple Lum, a blue magical tether will connect Rayman's fist to the Lum allowing Rayman to swing back and forth in a parabolic shape. While swinging on the Lum, Rayman can also cause the tether to swivel around, allowing him better ease at reaching a far off platform that would otherwise be inaccessible.

Master how to catch them and they will show you a quicker way.
—Manual, Rayman M

The Purple Lums appear in all iterations of this title. They function the same as in Rayman 2, but their appearance varies between versions. In Rayman M, although they are called Purple Lums, they resemble flying rings. In the GameCube and Xbox versions of Rayman Arena there is a small tether connecting the Purple Lums to their ring. In Rayman Rush, they share the same appearance they had in the PlayStation version of Rayman 2.

In the handheld versions of Rayman 3 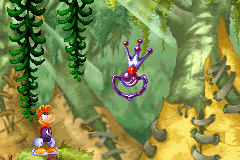 A Purple Lum in the Game Boy Advance version of Rayman 3.

By shooting them, Rayman can grab on to them.
—Manual, Rayman 3 (Game Boy Advance)

In the handheld versions of Rayman Raving Rabbids 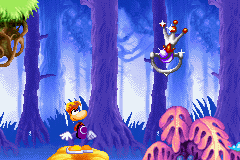 A Purple Lum in the Game Boy Advance version of Rayman Raving Rabbids.

In the Nintendo DS version of Rayman Raving Rabbids, Purple Lums can only be found near the end of the game and require a special power to interact with. To swing off of them, Rayman has to shoot a Yellow Lum. Doing so won't use up any of the collected Yellow Lums. The Purple Lums share the same appearance they had in Rayman 2.

In the mobile phone version of Rayman Raving Rabbids, Purple Lums look like the ones in Rayman M. Instead of insect-like wings, they have bird-like wings, just like the flying rings from the original Rayman game.