Difference between revisions of "Rabbids (series)"

The current logo of the Rabbids series

The Rabbids series, also known as Raving Rabbids and Rayman Raving Rabbids until 2009, is a party and platformer video game series developed by Ubisoft. It began with Rayman Raving Rabbids in 2006. The series branched apart after the general positive reception of the antagonists known as the Rabbids in their videogames and media, and the very small involvement that Rayman had in the first three games. During this branching process, the Rabbids started their own adventures in Rabbids Go Home, while Rayman returned to his platforming roots in Rayman Origins. The Rabbids are still part of the Rayman universe, but their role has been diminished since then.

Unlike the Rayman series, the Rabbids series features a universe more focused on real life human civilization, pop culture and satire on society, with the Rabbids exploring Earth and trying to conquer it with the little knowledge they have on the complex human lifestyle. 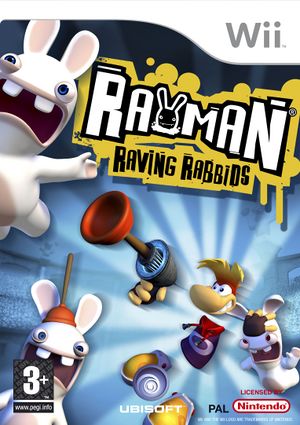 The cover of Rayman Raving Rabbids

Rayman decides to take a few baby Globoxes out for a picnic, which is quickly disrupted by the sudden invasion of a species new to him - the Rabbids. He and the babies are captured and taken to a Colosseum, where he becomes the Rabbids' source of entertainment. The objective of the game is to pass the many challenges that the Rabbids give to Rayman in the form of minigames. The minigames were originally designed to demonstrate the posibilities of the Wii's motion controls, but were soon after adapted to other consoles with regular controls. After beating all of the challenges, Rayman is able to escape using the plungers he had earned after each day of success. He soon realises that he had left the babies behind, and tries to return for them through a hole a rabbid had made, but he gets stuck for some time, leading to the ending of the game. The game also features a multiplayer mode for most of the minigames, in which the players take turns to play the same minigame and try to obtain the highest score.

The Gameboy Advance version is more focused on platforming, and features Rayman characters such as Ly, Globox and Murfy. It also has a more detailed story explaining why the Rabbids want revenge.

Soon after the events of Rayman Raving Rabbids. Rayman learns that the Rabbids are planning to take over Earth, and attempts to infiltrate them by dressing up as one and imitating their behaviour, while following them all over the world and collecting as much information as possible to use as a warning to the Earth's inhabitants. This is the first game in the series to not take place in the Glade of Dreams, and the first one to be entirely focused on 4-player minigames. The game doesn't have a defined ending, probably leading to the events of the next game.

In Rayman Raving Rabbids TV Party, Rayman is still being chased by the Rabbids, as he hides in a small house in the forest. However, the Rabbids mysteriously travel into the television set inside the house, after a strike of lightening crashes into them. The Rabbids harass him and even creatures living outside the home for an entire week, by mediling around with the TV. Rayman attempts several ways of keeping the Rabbids stuck inside the TV from annoying him, including throwing the TV outside, but to no avail. It is until then the TV cracks and the Rabbids are set free to chase Rayman again. This game is similar to the previous game, but has an 8-player mode and balance support for some of the minigames. It is also the first Rayman Raving Rabbids to not feature Rayman as a playable character, or anything related to Rayman series outside of the cutscenes. 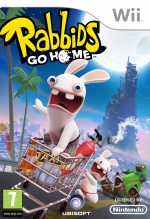 The cover of Rabbids Go Home

On the outskirts of a bustling city set in Earth, a group of Rabbids hang around in a junkyard, bored of partying, and want to go home. The problem is, they don't even know where they come from, so they cast the moon as their new home. They notice the piles of junk around them, and decide that by making one pile bigger with even more junk, they could reach it. Two Rabbids then take a shopping trolley and search around for things to toss onto the pile, before setting off to the city to look for more junk. This is the game that separated the Rayman series from the Rabbids series, as it takes place in a more realistic and civilized universe. This is also the first home-console Rabbids game to not be focused on minigames. The player takes control of two rabbids who run a shopping trolley collecting all the things they can in a similar way to Katamari Damacy.

If the last level is beaten, the game shows the ending, in which the Rabbid who stands on a globe to see how far the moon is attempts to hug the moon, but realizes that they do not have enough stuff. Then, bombs appear on the pile, in which the pile blows up, sending the stuff back to the humans. The bright side: When the bombs blew up, the Rabbids made it to the moon. The game then shows the credits. 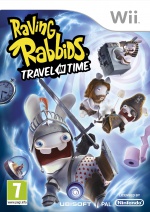 The cover of Raving Rabbids: Travel in Time

Set in the year 2012 as the default year, the Rabbids discover a Time Washing Machine. In the intro to the game, a Rabbid is traveling through time, from a prehistoric setting, to ancient Egypt, and other time periods. The Time Washing Machine gets damaged in traveling. The Rabbid travels in time to a history museum. He and other Rabbids access time periods through pictures of the event. As they alter time, they create different scenarios, such as giant Rabbids and the Earth under water and in space. At the end of the game, the Golden Time Washing Machine is acessed. The Rabbid travels to future, into the year of 4096 and ends up in a large facility. He explores the facility and finds some pants on the wire of one of the giant robots and pulls the pants off, making the robot shoot a laser and open up a door. Professor Barranco (from Rayman Raving Rabbids 2) is drilling Rabbids in using time machines to conquer history. The main Rabbid pulls the plug on one of the machines, sending him and the machines into time, making a very fast version of the game intro. This sends the Rabbid back to the history museum. 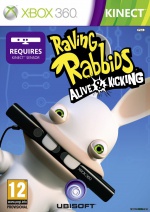 The cover of Raving Rabbids Alive and Kicking

Raving Rabbids Alive and Kicking has the player using the Kinect to play the role of the humans, trying to defend their city from the destructive Rabbids. The game includes various minigames that can be controlled by the player's body using the peripheral's built-in camera. It can also be played by up to 4 players.

On the 3rd April 2012, a game called Rabbids Invasion launched for Facebook. The aim of this game is to "invade" human properties such as houses, farms etc, and use the converted buildings to generate resources and expand the invasion, while taking on numerous quests - the more it spreads, the more types of buildings and other items are made available. The game depends on two virtual currencies - coins, which can be generated from certain buildings and used to buy the in-game items, and toiler paper rolls, which must be purchased either with Facebook credits, or earned through certain factors, such as taking up an offer for a shopping site or installing another Facebook application. Toilet paper rolls can also be used to speed up the time it takes for each building to generate the resources it makes, or to finish a quest without the assistance of a Facebook friend.

The gameplay is similar to the Mario Party series. It features a board game-like scenario. The player will have to roll a dice with the Wii U Gamepad and depending on the number the dice lands, the Rabbid will move to the corresponding square. These squares trigger a different feature and can be easily told apart just by looking at the symbol drawn on the square. Your primary goal is to win the board game by winning trophies, which can be collected by playing and winning minigames. Only two players can play at a time. Once a player has collected all trophies needed, you need to get to the center. Once you get to the center, the game is over and the player can win prizes.