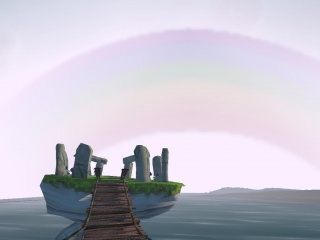 When Rayman arrives at the Creek, there is already a lot to do. As usual the Teensie Stone Circle can be visited, along with the Magic Well. Ly's Cave stands nearby, which acts as the equivilent of Ly's House or Ly's Stele in the previous hub worlds. The Pirate Factory cannot be explored yet, as two generators must be destroyed to remove the lasers before Rayman can access it. Rayman must travel to The Precipice andThe Echoing Caves to find the two generators. However, he will be unable to reach the latter without first taking a trip to The Pirate Mines and rescuing the Baby Globoxes there. Pirates will attack him on the cliff-face and in the cave that he must pass by to reach these three areas. Once both generators have been destroyed, he can enter the Pirate Factory.

Beneath the Lava Sanctuary has one of the game's firsts. Unlike practically every other level, Rayman does not take a spiral door at the end but instead takes an ordinary door deeper into the sanctuary. For this reason, he reapears across the pool of lava at the pirate factory, rather than a Teensie Stone Circle. Now, he can enter the Lava Sanctuary and bring the back the third mask.