Raybolt is a character who appears in Rayman Adventures. He is a member of Rayman's species. He was introduced alongside Swifterella in the Summer Marathon Event.

Raybolt is an athlete who's ready to partake in the Summer Marathon challenges. He looks exactly like Rayman, except he dons a red headband and tank top that has the number zero taped onto it, which is supposed to reference Rayman's symbol. Raybolt also wears black running track shoes that have red laces, a white squiggle logo, and white soles on the bottom.

Raybolt has been training for the summer marathon all year and is ready to run like the wind! He's what we call a real sportsman, and believes in fair play. Watch out world! He's here to win the Marathon!
—In-game description, Rayman Adventures

He could be purchased for 2 500 Golden Medals during the Summer Marathon event. 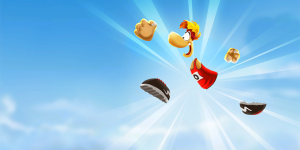