Rayman: Hoodlums' Revenge is a spin-off isometric platform game based on Rayman 3: Hoodlum Havoc that was released exclusively for the Game Boy Advance in 2005. It is the first and only game (as of 2009) in the Rayman series to be played from an isometric viewpoint in what appears to be a 2D environment, while using 3D sprites.

Taking place supposedly a short while after the events in Rayman 3, Globox's body is once again invaded by André the Black Lum while Rayman is asleep, and now they have to search for each other. Meanwhile, the Hoodlums have been ordered to clone the body of Reflux and once again attempt to take over the Crossroads of Dreams.

Rayman: Hoodlums' Revenge's gameplay uses some elements from Rayman 3, including the score counter and the Combo-mode, Teensie cages and Laser Washing Powder cans. The difference is that Lums, namely Yellow, Red, Green and Blue Lums, are collected as well as gems. In each level, there is a certain number of cages and Yellow Lums to collect and they are counted down; the more the player collects and the higher he or she scores, the more likely he or she is to gain up to three Murfy Stamps, which are needed to unlock bonus levels.

In a few levels, Globox is a playable character, though he cannot fight the same way as Rayman, or go near the Hoodlums (because he is afraid of them, he will automatically run a short distance away from), unless he drinks a keg of plum juice, which will send him in a trance and have the confidence to attack enemies. Sometimes Rayman and Globox can be played in the same level, though the player will have to switch characters for the right tasks, and the level cannot be exited unless both characters meet each other at the exit. 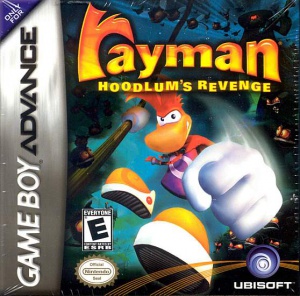