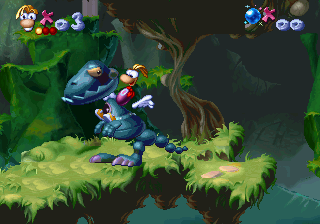 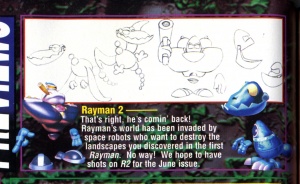 The Chief and an unnamed robotic dinosaur appear prominently in this preview image of the game.

Early in its development, Rayman 2 was intended to be a 2D game, which would have been very similar to the original Rayman in terms of graphics and gameplay. This 2D game would have been released for the Sega Saturn and Sony PlayStation.

The game would have had a much stronger similarity to the original game than the final version did. The art style would have remained very similar to that of the first game, as would the gameplay, with a few notable additions. The mechanical gameplay was to be more accessible and less difficult than that of the original Rayman game, but it was also to be more cerebral; puzzles would have taken on a larger role, as can be seen in the playable level which was included with the PlayStation version of the final game.

All of the characters would have been limbless. Betilla the Fairy, and possibly other characters from the original Rayman would have returned, and new friends would also have appeared to aid Rayman. 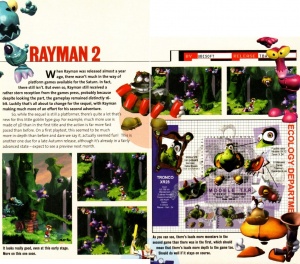 A Sega Saturn magazine's article on the game. 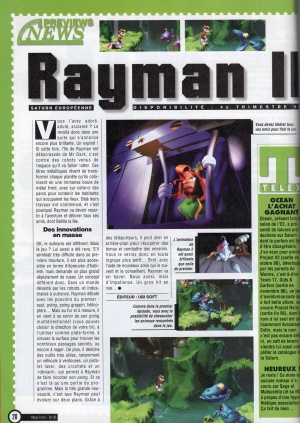 Another magazine's preview of the game (French).

The plot of the cancelled game was similar to that of the final Rayman 2. In the prototype game, Mr Dark has been defeated and has vanished from Rayman's island. Then, evil robotic invaders from space arrive, and Rayman has to defeat these invaders while rescuing his friends from their imprisonment – one character who was imprisoned by these robots was Betilla the Fairy. The robots planned to convert the entire planet into a cold ball of metal. A character named the Chief, similar in design to the General, would have been involved in the game's story, and probably would have played a much larger role than that of the General in the final version. It has been speculated that he was the game's villain, and was replaced by Razorbeard in the final game. 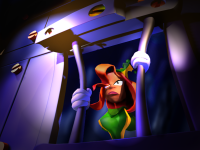 Betilla the Fairy, as she appeared in the cancelled game. 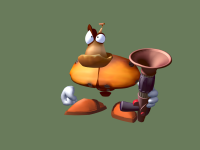 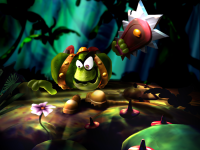 Its exact meaning is unknown; however, Vincent Greco was the lead programmer on the original Rayman game, and went on to work on Rayman M and Rayman 3. Judging by the appearance of his name in its files, it would seem that he was also involved in the production of this prototype. 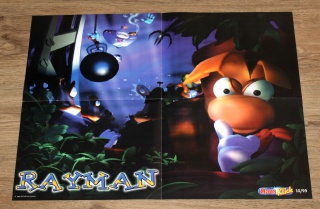