Many textures which were later used in the Playstation version can also be found in the files for the PC version suggestion they were originally meant to be included there as well. These include the textures for Antitoons and the stone with Ly's face. Textures from the Dreamcast version were found as well, such as the textures for Eig. Some leftovers, such as controller icons, where found from the N64 version.

Ssssam was originally mean to be metallic. 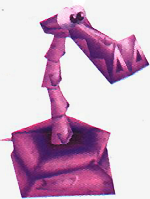 There were two different demos made for Rayman 2, both of them including two parts from The Fairy Glade. 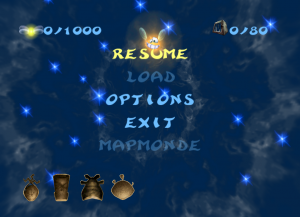 The pause menu in the demo

The following text was found in the PC versions files.

Since they captured you, Nothing can stop them. They've taken everything And enslaved our people. Their Robo-Rats sniff out the hidden for capture. In the chaos, they exploded the Primordial Energy Core. The Energy broke into 1000 magical fragments called lums. We grow weaker. Soon, it will be too late... You must escape, Rayman You are our only hope!

The Buccaneer, prison ship of the pirates, commanded by the admiral RazorBeard. Slaves now on board 5000. Wake up Rayman, I have sent you help...

The Woods of Light

The following text was meant to appear during the intro when the pirates dragged Globox into Rayman's cell.

No! Not the whip!

A silver lums! Incredible! I can feel her energy coming into me... Now I can shoot with my fist again

This was meant to be spoken by Murfy after Rayman escaped.

Howdy, rayman! glad to see that you escaped!

Erm, you see... we've got separated... Not there Daddy Globox? Boohooooo! We want our Daddy! Now don't worry kiddies! I'll bring your dad back! But first I've got to find LY. She often comes here. Have you seen her around? Some nasty pirates took LY over there! Hummm... I gotta help her!

The pirates have taken Ly to the Fairy's Glade. They've locked her in one of their castles.

Oh, Rayman, I was afraid Globox didn't make it.

And the energy has become very difficult to reunite.

He's the Spirit of the World. His power is limitless.

The Marshes of Awakening

But I did see Globox get arrested by 2 Pirates.

So go away! Come back when you have the name.

I have hidden a precious treasure inside here. You can have it for yourself, If you are faster than me. I'll give a head start, But don't delay! If I catch you, I'll show you no mercy...

The Walk of Life

To increase your chances Here's some vital energy

The Cave of Bad Dreams

I want the treasure!

No treasure for me!

In the demo files, the same text appears, but with a different third option.

I want the treasure!

No treasure for me!

I wanna set my buddies free !

The demo version also includes a new line spoken by Jano after Rayman made the decision not to take the gold.

You didn't fall into the trap.

You idiotic fool ! Go and find him ! Don't come back without his corpse!

The Walk of Power

I think you deserve a much tougher Shootout

The Tomb of the Ancients

Somewhere in the sky... The pirate prison ship. Slaves now on board 45 263

Nuh.. nothing serious.. he just found the Third Mask

At last the Final Mask... Bravo Rayman! You've succeed in awakening me ! Now I can send you to The Pirate prison ship. Now go and fight your Final battle...

Come in, you useless worm! Ray... Rayman has found the final mask. He's just been spotted on board the ship.

You've failed me again... I did warn you, didn't I

Oh, I'll leave you both alone...for all eternity! Huh?

we're all with you!

one last effort, and the pirates will only be a bad memory!

don't listen to him! he's nothing but a dirty liar!!

take him out and we'll finally be free!

we're all with you, little buddy!

win, and i'll melt my gold to make a statue of you.

i've taught you well. don't let me down!

you are the greatest hero i have ever known!

we'll be dancing to bring you luck!

i'm not afraid of you!

i'll feed your remains to the piranhas!!

go ahead and relax! you're about to die!

look how easily we tame these savage beasts!

i'll decorate your gravestone myself!

ha! globox was a better fighter than you!

did you remember to say goodbye to ly?

you're going to pay for what you've done!!

You are so ridiculous!

Note how there's no mentioning of Polokus here.

The slaves have broken their chains and escaped. On the planet, our people have eliminated the last pirates. Destroy Razorbeard, and our victory will be complete!

The Council Chamber of the Teensies

So, did you guys figure it out? Are you the real king?

The Knowledge of the World

public notice! witch Ly, presently languishing in the stronghold, will be made to walk the plank at dusk. reservations are advised.

beyond this point lies a vast unexplored wasteland.

These levels were not included in the final game. Morbide is the file name for The Tomb of the Ancients.

The demo files include different names for several locations.

AXEL: Guardian of the sanctuary of water and ice

FOUTCH: Guardian of the sanctuary of lava and fire

UMBER: Guardian of the sanctuary of rock and stone

You'll pay for this! No! You can't come in here!

Quickly, Rayman! we want our papa!