Rayman Adventures is a 2D sidescroller platform game for iOS and Android devices, that uses the same graphical style of Rayman Legends. It was made available in soft launch in New Zealand on July 21, 2015, in Canada on August 25, 2015 and was released worldwide December 3, 2015. The game’s graphical fidelity runs at 60 frames-per-second. This is the first Rayman game to be released on Apple TV.

The enchanted forest is in trouble; the ancient eggs that sustain the sacred tree have been stolen and scattered across the world.

Rayman Adventures is a running game just like its predecessor, but unlike Jungle Run and Fiesta Run, the player can change the direction they are running to. The game has levels that the hero can explore, albeit while running constantly, with the ability to change direction while playing. So it's still an auto-runner, but a bit of a different approach from the previous two games. New to the game are small roundish creatures known as the Incrediballs: the goal of the game is to rescue them. Once rescued, they will assist the hero in their quest. Each Incrediball have their own unique ability to help the hero, such as being able to detect nearby Teensies, protecting the hero or being able to collect a bunch of Lums for the hero.

The game is divided up into adventures which contains 3-4 levels and can not be revisited. Each levels has 3 rewards the hero can get depending on their amount of Lums or time, depending on the type of level. There are 4 types of levels: exploration levels, Lum collecting levels, fight to the finish levels and time challenges. Each adventure has a harder optional level with a skull on the icon. This level will give to twice as much rewards as normal levels if the player completes it.

Once all obligatory levels in an adventure are completed the player will get the egg. There are four type of eggs; bronze, silver, gold and crystal eggs. The bronze grows the tree 10 meters if it's a new creature, the silver 20, the gold 30 and crystal 40. If it's not a new creature in the egg it will will up the clon-o-meter by 1 step if it's bronze, 2 for silver etc. Once the clon-o-meter is filled up the player will get the choice to either get 20 gems or wait to get a lucky ticket. Waiting a second time will earn them a golden ticket.

There are a total of 110 Incrediballs to earn. Each time the player gets one they grow their tree a bit higher and the they're added to the sacred tree where they are grouped in families. Finding all in one family grants them a reward. When the tree grows it will sometimes hit presents that are above it. The presents can unlock new worlds or gems.

The worlds in the game are mostly based on the worlds from Rayman Legends, for example Medieval Mayhem is based on Teensies in Trouble. The new worlds are unlocked by collecting Incrediballs and growing the Sacred Tree 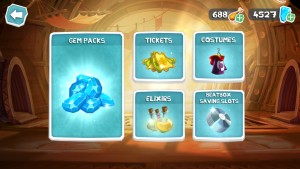 The shop in Rayman Adventures

Rayman Adventures, unlike previous mobile games in the Rayman series, now has in-game achievements. Each achievement has three levels of completion, bronze, silver and gold. Each time the player completes one of the steps they get a reward and the achievement requirement is raised for the next step. The rewards they get are either lucky tickets, gems or food. As of version 1.2.1 the game has 69 achievements counting all necessary steps to complete them.