Rayman Designer hacking is the process of modifying the program files of the game in order to change the appearance and the behaviour of in-game events and sceneries.

In every World-folder of the game, there is a .PCX graphic file. It contains all the graphic tiles which are used by the Mapper. You can change or add stuff, but you cannot edit:

Also note that all maps (except the ones which Ubisoft made) will use the new graphics if you replace the standard tiles.

All animated spites of the game (Rayman himself, enemies etc) are stored in .DES files. These files are packed in the .WLD files of the game. It's totally unclear how to open these files, but when you opem the WLD files of RD (in the "pcmap" folder) with a texteditor, you can see which .DES and .ETA files are packed in it. The .ETA files do order the spitefiles in some way, but what they exctly do is unsure (it seems that they give the events some abilities).

To see whats in the .DES files, you must change some things of an eventcode (see below) with a texteditor, save it, go in the game and see what happens (it may crash cause not all coordinates work). The names of the .DES files are also tell you whats in it (most of them are in French, but some are English.) Examples:

Some of these files contain only one object (like the CLE.DES) and others conatin very many different objects. Note also that you can't see which .DES files Rayman 1 or the RJ Games have. In these games the .WLD files are packed / encrypted different. But in the .WLD files of the "Fanpack" and in the .WLD files of "Rayman Collector" you can see the filenames.

In every World-Folder of the game, there is a file called EVE.MLT. It contains all the codes of the events of the current world and can be modified any text editor. One has to scroll down to see the codes in question. It is unsure which programming language the game is written in, but the events are coded in this way:

The main code of an event will repeat itself when it comes to the end. Not all codes work for all events (= behaviours). This is all that is known about this part:

This is an unoffical tool that makes Rayman Designer modding much easier. It also comes with a large content package which includes a great deal of content from Rayman and Rayman Junior that was not availible in Rayman Designer, and also some new unofficial content.

Through some editing of the game, the following things have been discovered: 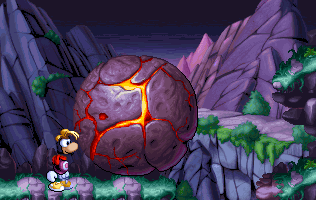 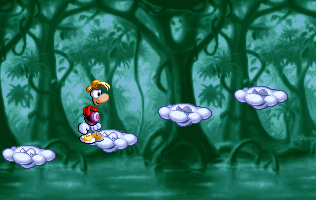 Clouds with a face (known from the Atari Jaguar Version) 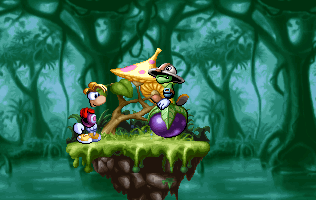 A small Livingstone on a plum
Retrieved from "https://www.raymanpc.com/wiki/script-en/index.php?title=Rayman_Designer_hacking&oldid=30858"
Category: