Difference between revisions of "Rayman Dictées" 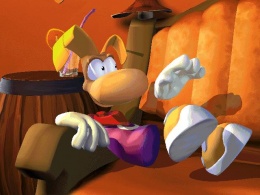 Rayman Dictées (also known as Les Dictées de Rayman) is one of the educative games from the Rayman Learning Game Series. This game for the PC is only sold on France and Canada and is available in the French language only, no other language versions were made. Rayman Dictées, as the name suggests, it focuses on dictation exercises to test the player's knowledge and to improve his/hers spelling and grammar capacities. It also features exclusive human characters such as Clara the Witch, Patrick, Gaaf, Tim, Junior, Landra and Sam.

One day, Rayman is resting on his room and Clara the Witch appears by magic with a machine called Télévox. Clara explains to Rayman that the Télévox was broken on a middle of a argument between Rayman's friends from the Amnesia Island, and she cast a curse, called "The Curse of the Express Refrigerator" by freezing Rayman's human friends' from the feet until the torso. She also explains that she can only free them if the Télévox is fixed. Rayman accepts to help, and he magically jumps to the Télévox.