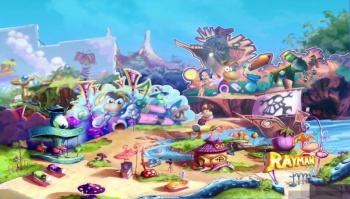 Concept art of Rayman Land, a level set to appear in Rayman 4

Rayman Land was a level planned to appear in Phoenix Interactive's cancelled Rayman 4. It is known only from one piece of concept art and does not appear in any form in any of the released Rayman titles.

It seems as though Rayman Land was a fairground containing attractions based primarily on the Rayman and Rayman 2 games with a merry-go-round mounted by a Globox figure and a Warship that appears to be another ridable attraction.

The level appears to be split into an area for each game; a Rayman area accesible by an enterance made to look like the ring on Rayman's torso and a Rayman 2 area accessible either by passing a small cliff decorated with Rayman 2 art or possibly accessed by riding the aforementioned Warship attraction.

The only parts lf the level seen to be based on Rayman 3 visible in the concept art is a statue of Rayman pulling a grimace while sitting atop a mushroom situated on a small island in the centre of the level, and an area with dodgems made to look like Rayman's racing shoes.