The original logo for the game.

Rayman Legends had a bunch of changes made during early production, most which has been seen through early leaks of the game.

Rayman, Globox, and the Teensies are off wandering through an enchanted forest when they discover a mysterious tent filled with a series of captivating paintings. As they look more closely, they notice each painting seems to tell the story of a mythical world. While focusing on a painting that shows a medieval land, they are suddenly sucked into the painting, entering the world, and the adventure begins. The gang must run, jump and fight their way through each world to save the day and discover the secrets of every legendary painting.

A dragon and a toad on stilts in one of the first leaked screenshots of Rayman Legends.

Rayman Legends was first leaked on April 23, 2012 in a marketing survey with screenshots from two early trailers. The following day, the trailers were uploaded to YouTube, but both were quickly taken down at the request of Ubisoft. On 26 April 2012, Ubisoft registered the domain names 'RaymanLegends.com' and 'Rayman-Legends.com', confirming the name of the game.

On 27 April 2012, the first full-length trailer for the game was leaked to the public. Ubisoft initially attempted to suppress the videos, but after a few hours they released an official statement, confirming that Rayman Legends was being developed by Michel Ancel and Ubisoft Montpellier. 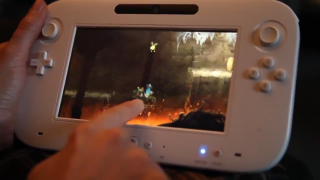 One of the leaked trailers show an early Wii U feature where the player can put a figure, such as a Rabbid figure, on the Wii U GamePad to affect the game in various ways. It is not known in which way they affect the game. The Rabbids as seen appearing in the game were later used in Rayman Adventures for its events. 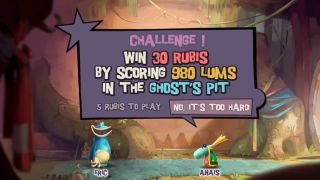 During E3 2012, an official trailer was revealed showing what would later become the level Once upon a Time. There are several differences throughout the level, and the final area was later used in How to Shoot your Dragon instead. One of the biggest differences is the first challenges room which features a new type of minigame known as Catch 'em All, a reference to Pokémon. This challenge would have seen one player controlling Murfy on the touchpad and moving over creatures to the other players before the time runs out. Leftovers of this mode have since been found in the PlayStation Vita version. Other differences include cages containing two trapped Teensies, different ways which Murfy could interact with the environment and unused music.

Unused content has been discovered within the game files. In the PlayStation Vita version, 10 unused maps for the Catch 'em All Mode were found.

In the localization file there is unused text which references a feature where players can send each other lucky tickets.

Do you wish to give a Lucky Ticket to [m:1]?
—Unknown, Rayman Legends (files)

Your gift has been successfully sent.
—Unknown, Rayman Legends (files)

There is also mention of a feature where the Bubble Dreamer would place lucky tickets back in paintings every day.

It is a new day, my friend! I have placed lucky tickets in all the paintings again! Go get them!
—Bubble Dreamer, Rayman Legends (files)

Some unused text can be found for the 8-bit levels.

You're about to launch the 8-bit world. Enjoy the trip back in time where glitches and bad graphics were considered cutting edge.
—Unknown, Rayman Legends Challenges App (files)

You're entering a 8-bit painting. Enjoy the trip back in time where glitches and big pixels were considered cutting edge.
—Unknown, Rayman Legends (files)

Along with the text for the different types of leaderboards there is mention of the amount of rescued Teensies and unlocked costumes. In the Rayman Legends Challenges App text there are a lot of minor text differences. Here are some of the more notable ones:

This is Rayman's evil clone. A nemesis created by Mister Dark to destroy Rayman. I don't think this guy has many friends in the Glade of Dreams...
—Character description, Rayman Legends Challenges App (files)