The Rabbids are getting ready to put into motion the plot that they have been preparing for years. Rayman is having a lovely picnic with the baby Globoxes when the Rabbids suddenly rise up from the ground, kidnap them all and imprison them. Rayman is thrown into an enourmous arena, under the gaze of a hostile crowd of Rabbids. From this day on, and solely for their own amusement, the Rabbids are going to make Rayman go through a series of trials. It is up to you to win them all and free Rayman.
—Manual, Rayman Raving Rabbids

In order to escape, Rayman must collect plungers to build a ladder up to the window so he can jump out. He does this by taking part in trials to entertain the Rabbids. After completing at least 3 of the four daily trials, the final challenge will unlock. Finishing that will reward Rayman with a plunger after which he is taken back to his jail cell to get some rest for the next day's lot of trials. As the days pass, Rayman's cell is decorated to look nicer. In the cell he is able to play music, change costumes and replay previous challenges. If all four challenges are finished in one day he is rewarded with more costumes and songs. After every day, he goes to the ladder of plungers, looking at the window hoping to escape, but a bird always comes and poops on him. After fifteen days, Rayman finally collects enough plungers and escapes, getting his revenge on the annoying bird on the way. Back at the forest, Rayman sees sheep eating the remains of the picnic and remembers he forgot the baby Globoxes. He tries to go back through a hole in which they were captured through but ends up stuck.

Rayman and the Rabbids are the main characters in the game. Also included are the baby Globoxes, the only returning characters besides Rayman, the Rabbids henchmen, strange creatures that look like a cross between rhinos and elephants and some animals, who only serve as fillers. 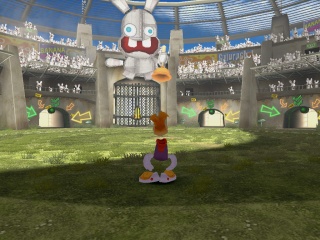 Each day Rayman has to move around the stadium and complete at least three out of the four minigames for that day, which always contains a dancing type game. Each day there are new minigames to play. Once three of the four games are completed, Rayman can go and complete the last challenge. The challenge is either a plunger shooting game or a warthog racing game. Once the challenge is completed, Rayman earns a plunger and goes back to his cell. He uses the plunger to build a ladder and escape out the window of his cell.

In total, there are 75 minigames, including second and third parts. A total of five of these are to be played each day Rayman is prisoner at the Colosseum, though at least three out of four must be passed before moving onto the boss challenge which is usually a warthog race or a bunny hunt. In score mode, each minigame is worth up to 1,000 points, and score mode total is 183000 points. These points can be used to unlock secret goodies in the bonus menu.

In the 75 minigames of the game, the player can reach 75000 points. The player can also unlock challenges, which consists of triathlons, pentathlons and decathlons. triathlons contain 3 minigames, worth 3000 points, pentathlons contain 5 minigames worth 5000 points and decathlons contain 10 minigames worth 10000 points. In order to gain max score, the player must perfectly complete every minigame in the series, one after another, however there is no chance of replaying an already completed minigame. The other 108000 points are obtained here in the challenges and though co-op and versus multiplayer bunny hunts. There are several challenges where it isn't possible to collect maximum score while another player is in game.

The bunny hunts are first person shooter style game in which Rayman, armed with a plunger gun, has to shoot any Rabbids that he sees and free the baby Globox they have trapped, without losing all of his health, which can be depleted if either a Rabbid gets too close to him, he gets shot with a plunger, or is attacked by rockets or carrot juice coming from the robots. The plunger gun can carry up to five plungers, and if they are all used, he will have to reload. Rayman is also armed with a grapple chain, which he can use to either ward off plunger attacks or grab a Rabbid that is close and toss it at other Rabbids, earning a multiple score.

Rayman can get extra points by doing specific shots:

Several other objects can be shot with plungers, such as radios and bells, which often distract the Rabbids into dancing, and are present in each level once. There are also several boxes which Rayman can break in order to gain power ups or power downs. These are: 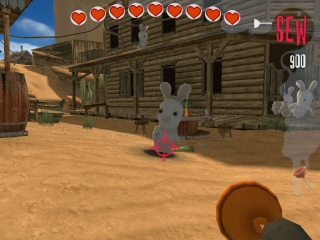 Bunnies Have A Soft Spot For Plungers.

The following is a list of the bunny hunts. 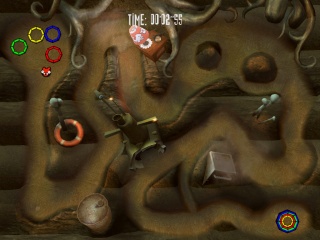 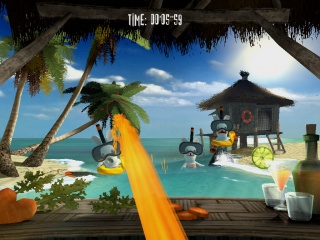 Bunnies Are Addicted To Carrot Juice. 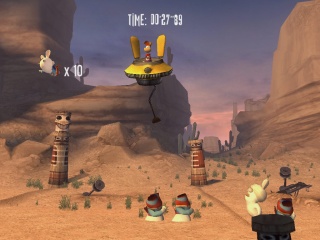 Bunnies Are Not Ostriches. 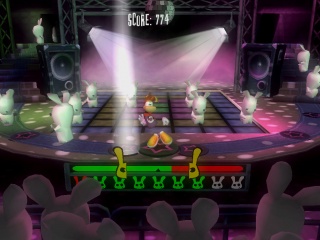 Rayman Raving Rabbids has a score mode, with minigames which unlock as they are completed in the story mode.

At the end of each minigame in score mode, there is an internet code for the player to submit their game score on the now defunct RaymanZone website. Each code was unique to tell which score is the player's on the website listed above. Each minigame page listed the top 3 players in each minigame. Since the release of Rayman Legends, RaymanZone redirects to the official Ubisoft website.

After the cancellation of the original Rayman 4, Ubisoft began work on Rayman Raving Rabbids. It was intended to be a free-roaming 3D platformer, contrary to the final party game release. Rayman would have instead had to defeat an army of sinister, zombie-like Rabbids in melee combat, rather than competing in minigames to escape them.

The following is photos that were released during the early development of Rayman Raving Rabbids.

There are several unused textures in the game, including leftover assets from Rayman 2.