Rayman: Raving Rabbids is the first video game of a spin-off series based on the Rayman series. It was released for the Nintendo Wii, Sony PlayStation 2, PC, and the Game Boy Advance in 2006, followed by ports for the Nintendo DS and the Microsoft Xbox 360 in 2007.

In order to escape, Rayman must collect plungers to build a ladder up to the window so he can jump out. He does this by taking part in trials to entertain the Rabbids. After completing at least 3 of the four faily trials, Rayman is rewarded with a plunger and is taken back to his jail cell to get some rest for the next day's lot of trials. As he goes on, Rayman's cell is decorated to look nicer and he wins more costumes and songs. After every day, he goes to the ladder of plungers, looking at the window hoping to escape, but a bird always comes and poops on him. After fifteen days, Rayman finally collects enough plungers and escapes, getting his revenge on the annoying bird on the way. Back at the forest, Rayman sees sheep eating the remains of the picnic and remembers he forgot the Baby Globoxes. He tries to go back through a hole in which they were captured through but ends up stuck.

Rayman and the Rabbids are the main stars of this game. Also included are the Baby Globoxes, the only returning characters, the Rabbids henchmen, strange creatures that look like a cross between rhinos and elephants and some animals, who only serve as fillers.

Rayman: Rayman was taken by surprise by this invasion from within. What do the Rabbids intend to do? It's hard to say. But now they're everywhere and their atypical psyches make them formidable and unpredictable opponents.

Pink: Pink is mute and timid. Yet, with just a little patience you can easily learn the basics of his method of communication and understand what he says. For example, "Hey mate!! What's up?" is translated, in his language, by firing a heat-seaking missile. (It is true that, long term, you could say that all he really knows how to say is "Hey mate!! What's up?").

Serguei: Serguei is a softy. Out of pure coquetry, he wears a delightful, finely worked metal muzzle. His joie de vivre and his strong sense of repartee make him a very pleasant companion. He's always ready to keep things light and lively with little tricks, such as grinding phalanxes, switching your clavicles, or even playing "this little piggy" with your toes.

The frog-rabbids: The frog-Rabbids are part of the elite commando team. They are formidable combatants. They are systematically sent out on the most dangerous missions, such as assaults on carrot juice bars, infiltrating a popular chorus or even maintaining the peace in front of the toilets.

Clark: Clark is not a Rabbid like the others. His Super-powers enable him to accomplish feats that gain him respect and admiration from everyone. He is the inventor and the undisputed champion of a new kind of biathlon (the consecutive combo: Descending Flight + Vertical Subterranean Race). His personal record: 2300 DF + 47cm VSR 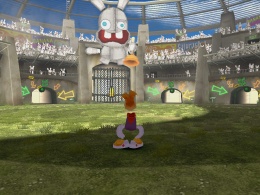 In total, there are 75 minigames, including second and third parts. A total of five of these are to be played each day Rayman is prisoner at the Colosseum, though at least three out of four can be passed before moving onto the boss challenge which is usually a Warthog Race of a Bunny Hunt. In Score Mode, each minigame is worth up to 1,000 points.

The Bunny Hunts are first person shooter style game in which Rayman, armed with a plunger gun, has to shoot any Rabbids that he sees and free the Baby Globox they have trapped, without losing all of his health, which can be depleted if either a Rabbid gets too close to him, he gets shot with a plunger, or is attacked by rockets or carrot juice coming from the robots. The plunger gun can carry up to five plungers, and if they are all used, he will have to reload. Rayman is also armed with a grapple chain, which he can use to either ward off plunger attacks or grab a Rabbid that is close and toss it at other Rabbids, earning a Multiple score.

Several other objects can be shot with plungers, such as radios, which often distract the Rabbids into dancing. There are also medical kits, and a power-up that shoots three plungers at a time, but there's also a power-down which breaks the plungers for a short time.