Difference between revisions of "Raywolf"

Raywolf is a playable character in Rayman Fiesta Run and Rayman Mini.

He looks similar to Rayman, but he is very hairy, and indigo in color. His hair is dark blue, his hands and feet sport claws, his hoodie and hood are tattered, and he interestingly sports nostrils.

In Rayman Legends, Raywolf's silhouette can be seen on the Heroes gallery painting, thus suggesting that he was going to be in the game at some point.

He is unlocked in Rayman Fiesta Run by completing the Nightmare Mode. 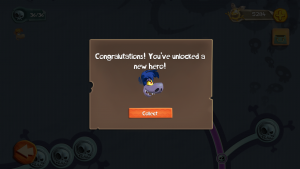 Raywolf is really into astronomy, you can tell because he's out in the Glade of Dreams during every full moon! Oddly enough, he was nowhere to be found during the last moon eclipse though...
—In-game description, Rayman Adventures (files)

A character photo of Raywolf can be found in the files of Rayman Adventures. 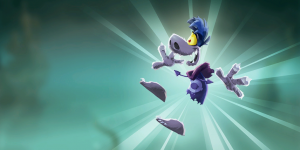 Raywolf as he would have appeared in Rayman Adventures.

In Rayman Mini he is unlocked for 15 electoons.