From RayWiki, the Rayman wiki
Revision as of 19:50, 10 September 2019 by Steo (talk | contribs) (Still need to revise this later when I continue the relics)
(diff) ← Older revision | Latest revision (diff) | Newer revision → (diff)
Jump to navigation Jump to search

Savage Swarms is the first level of the Grumbling Grottos, a world in Rayman Origins. Flying creatures appear heavily in this level but the heroes can briefly drive them away by punching gongs to create sound waves. This is the first level from this world and twenty-first overall that's not included in the Back to Origins mode in Rayman Legends.

As the heroes advance, they come across a large group of flying creatures. In order to scare them away and continue, the heroes must punch a gong to create a sound wave, causing the flying creatures to move away for a short period of time. Some sound waves are already provided by other objects. At one point, a special kind of cyclops gong will appear. This specific one, if punched, creates a sound wave around the heroes, but it won't last long. The first Skull Coin can be collected by punching the yellow gong and reaching the coin surrounded by flying creatures. The second Skull Coin can be found through performing a walljump above the exit. 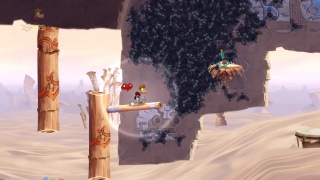 This area starts out quiet, with no enemies in sight. Along the way, if the heroes crush attack on a slanted drum and perform walljumps, they find the first secret area. After the Electoons are saved, the heroes can move on. The heroes will come across two paths, both will result in finding a Skull Coin, the third and fourth ones. But the lower path will need to be taken in order to continue. More gongs of the variety are still useful for getting to the exit. The fifth Skull Coin can be retrieved by going down and punching a gong to the right of the coin.

The heroes need to be careful when using the moving sound waves, as flying creatures are everywhere. Once they get to the huge sound wave, they can destroy the three Red Birds and break the cage.

Rayman and his friends must use the mosquitoes to reach the Electoon cage. During the ride, projectiles need to be shot on certain gongs to scare away flying creatures. When the heroes get to the end, they need to keep a gong providing a sound wave while destroying the Red Birds. Once done, the cage can be broken.

In this area, the cyclops gongs will be used more to get past the flying creatures. Because of this, the heroes need to be quick when moving along, because the gongs are spread out. The exit is not too far away. 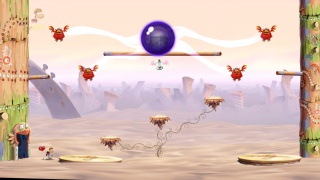 All the heroes need to do is defeat the four Red Birds around the Electoon cage. When completed, the cage can be broken open to end the level. The heroes will then pose on the photoboard as the Magician waits for the total amount of Lums that were collected.