Difference between revisions of "Sea of Serendipity" 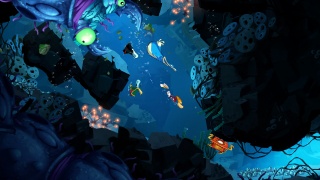 Promotional screenshot of Sea of Serendipity, showing Rayman, Globox and two Teensies swimming away from a Giant Eel.

The Sea of Serendipity, later revisited as the Angsty Abyss, is the fourth world in Rayman Origins. This world composes of dock environments above and friendly and dangerous underwater elements below. This world is the first to not have any relation to a world from the original Rayman game.

Sea of Serendipity takes place most often in the underwater world, filled with a variety of fish like ones that sing a tune in a group and the Blowfish. There are also jellyfish, Sea anemone and Giant jellyfish. Another part of the world can be seen; a dock like area where members of Globox's species reside at, the Red Wizards. The Darktoons have taken over the docks, and consequently the Red Wizards have them stuck on their heads. Some parts of the underwater world are dark and infested with other underwater creatures.

At start of the world, above the surface of the ocean, a tribe of Globox's species named the Red Wizards live in a village supported on stilts. Once the team of heroes save the ocean nymph Annetta Fish from a Darktoon, she will give them the power to dive. With this power, the team can go deeper into the sea filled with lighted and dark caverns, and enemies like jellyfish, Tentacle claws, Sea anemones and redfish.

In order to save one of the Four Kings, the team must enter Angsty Abyss. Similar to its counterpart, the team will have to swim through the caverns deep in the sea, although the caves are more dangerous than they were in Sea of Serendipity. The heroes will then have to fight Creveton, the final of the Four Kings. If the Kings were saved in order, the players can return to the nymphs at the Dreamer's Door.

Sea of Serendipity returns as a world in the Back to Origins mode in Rayman Legends. The levels from Sea of Serendipity and Angsty Abyss fuse together into one world with some levels, such as the Electoon stages, not being present. The levels themselves are mostly the same, with some graphical updates. The Magician's hat has however been removed from the levels and some levels have been made easier. Swimming with Stars is known in the game as Swimming with the Stars, and Beware of Mini-Murray is known as Beware of the Mini Murray.