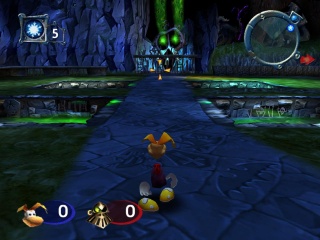 Shadow Plain is a dark and simple square-shaped map that is generally rather open and located in the haunted areas from the Glade of Dreams, probabily in the proxitimities of the the Tomb of the Ancients in Rayman 2, as its visual presentation suggests. It is surrounded by deformed and broken metal fences with skull symbols and sharp edges with mountain walls on the left side, higher levels of land in the right side, thorn tentacles, tall and naked trees and grass. The front side of the map has got a big skull of metal freeing a green toxic gas from the eyes. In the opposite side, there is a closed metal gate, showing an opened grassy area with some groups of thorn tentacles. The cardo road that connects the gate to the skull is carved with spooky symbols like bats, tombs and skulls. There's a road made of bones that connects the center of the battle arena with a closed gate in the right side. The sky is covered with purple and pink-coloured clouds. There are small walls also carved with spooky symbols that set slightly away from the corners of the single-room map (high enough to hide a player running behind them) and on top of two of these will appear Generators in Lum Fight. The center is formed by paths that link like a "+" sign resembling the Roman floor plans, and the middle also features a Gold Generator. The center is also formed like a square, and the remaining area contains squared holes with toxic gas in the ground--four in each corner--and each contain a standard Generator, making at total seven Generators foundable in the Lum Fight battle mode of Rayman M (One Gold Generator and 6 standard Generators). In the Capture the Fly battle mode, the idle location from the Light Fly is in the center of the map. 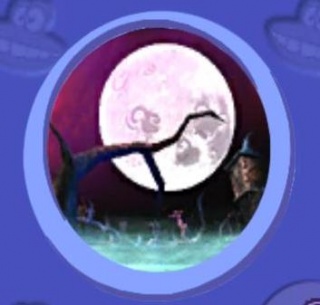 Shadow Plain, as it is seen in Rayman Arena's Menu 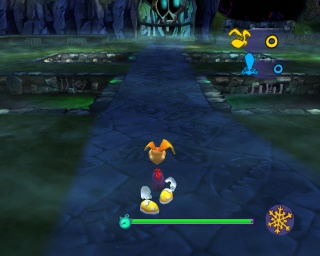 The battle arena has got some changes in Rayman Arena's version: