Difference between revisions of "Shell" 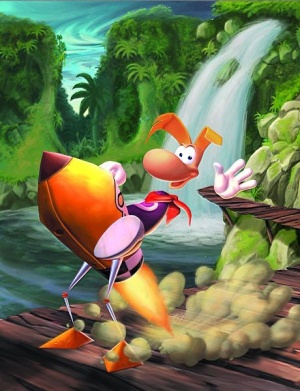 A Shell is a highly-explosive, rocket-shaped, animalistic robot in Rayman 2: The Great Escape and its remakes. They were built by the Pirates, and are used by them to guard passages. They chase Rayman if he comes within their line of sight. If Rayman manages to avoid touching them for long enough as they chase him, they become tamed, and Rayman can jump on their backs and ride them. This can be done easily if they are sleeping, in which case it is unnecessary to tame them. If they hit Rayman, or any other object or creature, they will explode, which can cause the player some health loss. There are three makes of shell: the Flying shells, the Walking shells, and the red Walking Shells. All three types can be avoided or punched to delay or stop them in their tracks.

Shells are useful sources of transport, as they can take the player over unsuitable terrain, such as lava or prickily areas. Flying shells are unable to touch lava, however, and Walking Shells are unable to go on water. In the Iron Mountains, the walking shell can climb onto walls of any direction without falling down as long as the player doesn't make a mistake and there's a smooth surface.

The shells are recognised by their horse sound effects, two black legs and shoes (however, in the Game Boy Advance version of Rayman 3 and in some Rayman 2 artwork, they are seen with silver legs with yellow knees and shoes) and a rocket shaped body, with a Pirate head pattern on one side. They come in yellow, but the Flying shells are grey.

Shells are of a friendly disposition, but they are programmed as guards and will attack if Rayman is he is in range.