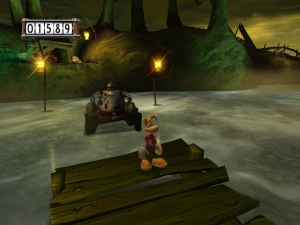 The Spinneroo or Hoodlock is a large, grey Hoodlum who allegedly worked as a prison guard. These Hoodlums carry heavy canonballs as malicious attacking weapons for any who try to bypass. These are casually wielded back and forth in normal gameplay but vigorously spun as the Spinneroo rotates in attack.