Difference between revisions of "Stone man"

Stone men are resistant enemies in Rayman. They can be found in the Blue Mountains.

They freely wander on their platform, turning backwards when they face an obstacle. There are two types of stone men: those who hit the ground and fire a flame at Rayman, and those who throw lava balls at him.

Upon being defeated, stone men inevitably resuscitate after a few seconds. Notably, Rayman's hits need to be spaced out or they will be ineffective against stone men. 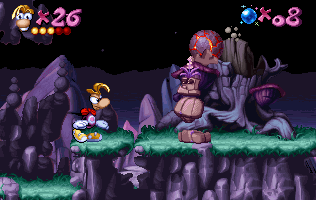 A stone man throwing a lava ball at Rayman 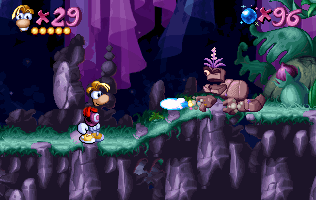 A stone man firing a flame at Rayman

The stone men will make a return in the upcoming Rayman Origins, in the mountain world of the game, Mystic Peak. Their appearance was confirmed in the sixth issue of the Daily Bubble on the official blog. They can be seen initially lying in rocky heaps and then throwing lava balls at Rayman.