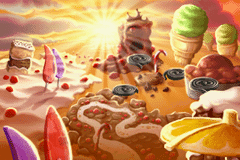 ‘Sweets’ is the fourth of the five worlds in the Game Boy Advance adaptation of Rayman Raving Rabbids. It is based heavily upon Candy Château, a world found in the original Rayman game. It is not known if the Sweets world was ever planned for includion in Rayman 4 in the same way that Band Land and Picture City were. 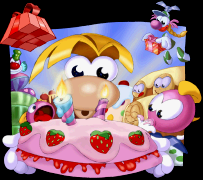 Candy Château, the world from Rayman upon which the Sweets world was based

The Sweets world, as its name implies, is an environment comprised entirely of sweets and other related materials, such as ice-cream cones, lollipops, chocolates, bread, cake, cutlery, fruits, drinks and jelly. While it bears a very strong resemblance to the first game's Candy Château, the Château itself is not visible. The Sweets world is predominantly golden in colour.

Enemies in the Sweets world include chef clowns, flying rabbids, marble cakes, dancing rabbids, religieuses, lollipops and a giant Rabbid as a boss.