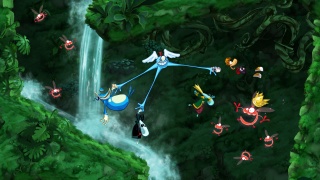 A Swingman, as seen in Rayman Origins.

The Swingman is a creature from Rayman Origins and Rayman Legends. As its name implies, its role in the game is similar to the role of flying rings in the original Rayman game, Purple Lums in Rayman 2 and the flying hooks from Rayman 3, in that they are used by Rayman, Globox and the Teensies to swing across wide gaps in the environment. It is a flying blue blob-like creature with a small purple hat and angel-like wings, that protrudes swinging arms to grab the heroes as they come near it (up to four arms at a time). Unlike the Fakirs and swinging vines, Swingmen have a more predictable management in multiplayer mode, as both the Fakirs and swinging vines require various players to control one single swinging element, while the Swingmen's multiple arms let the players have their own swinging element; the Swingmen, however, move their arms automatically, and cannot be controlled by the players who holds their hands.

Swingmen also appear in Rayman Jungle Run and Rayman Fiesta Run; the player has to grab their hand and jump with precise timing in order to acquire all of the Lums.

Platformman seems to have a close relation with Swingman.