Teen Punk is a playable character in Rayman Adventures. He is a Teensy that has loves to mess with machinery by himself within the engine room of the Captain's ship.

Teen Punk dresses like an old fashion pilot. He wears an aviator hat with goggles that cover his eyes. He has a white scarf beneath his head. He also wears a brown leather jacket that covers his beige, buttoned shirt with a belt buckled around his waist.

Teen Punk's passion is tinkering in the engine room of The Captain's ship. While he'd rather stay on board ship, he does enjoy an occasional adventure or two.
—In-game description, Rayman Adventures

In Rayman Adventures he can be purchased for 3 000 gems. 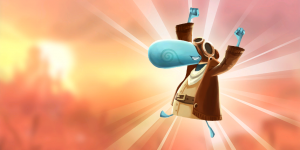