Difference between revisions of "Teensy Elf 2"

Teensy Elf 2, also known as Teen-Dolph, is a playable character in Rayman Fiesta Run exclusive to the iOS version.

Teensy Elf 2 is a Teensie that is dressed up as a combination of an elf and a reindeer. Teensy Elf 2's most distinguishable cosmetic items are his antler headband and his shiny, red nose at the end of his real nose. Teensy Elf 2 wears a green coat that has fur trimming around and has fur cuffs. Teensy Elf 2 dons a skirt with fur trimming that has a black belt around it. He wears black, pointy elf shoes.

In Rayman Fiesta Run he can be purchased for a certain amount of Lums in the iOS version. He was introduced as one of the three Christmas costumes during the second Christmas update to Fiesta Run.

Despite not being in the game, Teensy Elf 2 has appeared in official artwork of the game that promoted the Christmas 2015 Update of Adventures and wished Happy Holidays. Teensy Elf 2's textures have also been found in the files of the game. In the files he is known as Teen-Dolph. 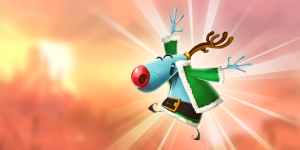