Difference between revisions of "Telescopic fist"

Hello Rayman, I'm Betilla the Fairy, and I'm going to help you in your quest. I can give you a new power.

Now you can punch with your fist. Good luck! Press the □ button to punch. The longer you press, the further you punch.

Rayman doesn’t have big biceps – hardly surprising, for an armless hero! – but he does have 2 fists which can prove to be very powerful.
—Manual, Rayman 3: Hoodlum Havoc

Rayman is given his first power by Betilla the Fairy

The telescopic fist is the first power that Rayman is granted by Betilla the Fairy in the original game, after the second map of Pink Plant Woods. It is his most widely used power, and with it, he can hurl a fist that defeats any enemies that are in his way. Another power, the grappling fist, allows Rayman's fist to grab things such as extra lives and flying rings. It can be powered up by picking up gold fists, which doubles the fist power, and speed fists which can make him throw it faster (there are three levels of speed). Rayman can also increase the power of his punches by either charging of fist or punching while jumping. 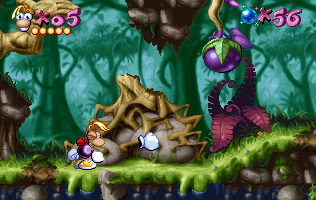 This power is not the same as shooting, a power Rayman primarily uses in Rayman 2, though in the beginning of Rayman Revolution he is temporarily given the ability to punch things by Globox until he frees the Grand Minimus in the Woods of Light, where he is given the shooting power.

Rayman also uses the telescopic fist in Rayman 3, where he can shoot it laterally by strafing around enemies. This is upgraded temporarily by the Laser Detergent Cans the Hoodlums leave behind.

Rayman uses this power yet again in Rayman Origins. He gets this power after saving Betilla the Fairy from the mouth of a Darktoon, as well as regular punch and kicking. While Rayman uses the telescopic fist, Globox slaps and the Teensies use their magic to hit.