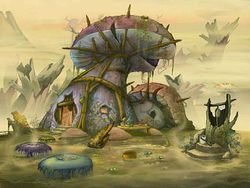 The level occurs after Rayman has tumbled from one of the Teensie Highways and been seperated from Globox. He lands in a toilet cubicle occupied by the witch Bégoniax, who becomes incredibly angry and threatens Rayman, despite his feeble attempts to tell her he did not mean anything. Just outside the toilet, Rayman can break open a cage, the occupant of which will bestow upon him the first Throttle Copter can of Laser-Washing Powder. Rayman can use this to reach Bégoniax's house. Once there, the battle against Bégoniax begins. The two chase each other around a large cauldron, the contents of which either can disturb at anytime by jumping up and hitting. If the contents hit one of the fighters, they will be transformed into a toad, making them very vulnerable to the other's attacks. If Rayman wins, Bégoniax flees, and if Rayman follows her, he can access a magic mirror which transports him to a new part of the marshes. 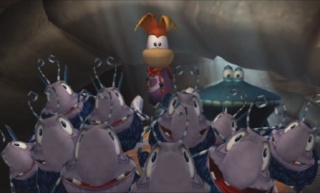 Razoff finds Globox in his basement and attempts to shoot him. However, he is suddenly met by a group of small creatures he had previously captured, who he is apparently scared of. He runs, but is caught by Bégoniax, who underlines her not-so-subtle desires of what she plans to do with him. Rayman, Globox and the small creatures watch, a little disturbed, as Razoff fails to escape Bégoniax's grasp, before Globox questions Rayman as to how they will reach the Doctor's office. Rayman notices a magic mirror in the basement, and remembering the one he encountered in Bégoniax's house, announcing that he has an idea.