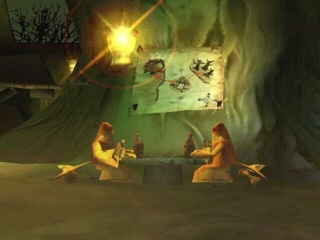 If one of the Hoodlums' boats is jumped on, it will move to the side of the building and sail in a circle, allowing Rayman to collect some yellow gems. It also come across a small island with a hallow tree which contains some more yellow gems, a green emerald & several rubies. If one uses the camera to look around, a fleet of Hoodlum airships can be seen carrying Hoodlums to the Land of the Livid Dead.