The Fairy Council is a location in Rayman 3 and alluded to in Rayman 2. It is homologous to the Woods of Light from Rayman 2, though the second half may also be associated with the Fairy Glade and the Minisaurus Plains from Rayman 2 and Revolution respectively. It is a tutorial level in which again, Murfy is Rayman's guide and introduces the player to the game's controls. The Heart of the World, which was also previously mentioned in Rayman 2, is located there. 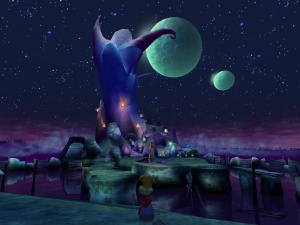 The Fairy Council in Rayman 3.

Its name is a misnomer, the Fairy Council is notably void of fairies; in fact, it is confirmed in Revolution that at least one fairy doesn't live in the council at all. Instead, the Fairy Council is actually the home of the Ludivs and the capital of the Teensie royalty. It is a very important place, as the Heart of the World is hidden there.

As alluded to in Rayman 2, the Fairy Council is a sort of central meeting place when trouble strikes the Glade of Dreams.

Straight after the introduction cinematic, the game begins. Murfy picks up Rayman, whose hands have gone missing, by his hair and airlifts him over the grounds near the Council, which has just been invaded by Hoodlums. The player mainly controls Murfy, and has to guide them both so that they collect all the Red Lums that are scattered around the place. If Rayman hasn't collected them all, Murfy will take him back to the beginning again. There are two rounds of Red Lums to collect. Once they are all collected, the pair lead themselves to safety.

Rayman and Murfy end up in a quieter place around the Fairy Council, which is scattered with jewels, most of which are yellow. At this point, Murfy withdraws the Manual and tells Rayman that his missing hands are in possession of Globox, who is hiding somewhere. He then introduces the player to the game's score system, in which points are added to the score for certain actions. Rayman then begins his search for Globox, while breaking Garden Ray-Gnomes by kicking with his feet and collecting gems and Red Lums (if he needs them). Some of the gems form a trail.

Eventually, Rayman and Murfy are outside of the Fairy Council itself, where they find a shivering barrel and a footswitch. It turns out that Globox is hiding in this, and Rayman has to follow him. The foot switch causes what appears to be a stone block to appear, which blocks Globox's path, allowing Rayman to kick him free. Now the the friends have reunited, so do Rayman's hands, and he can now use his fist to attack. Near the entrance, he'll encounter a single Hermit Crab hidden in the ground.

At the door of the Council, there is a hand switch which turns on a light that attracts Globox's attention briefly. He turns around and notices a gang of Hoodlums - a Hoodmonger and two Slapdashes - coming down in an air boat. Globox runs straight through the door into the Council, followed by these Hoodlums, and then Rayman and Murfy.