The Magician is a major limbless character that makes his first appearance in the original Rayman, and later appearing in several educational spin-offs of the game, such as Rayman Junior and English with Rayman. 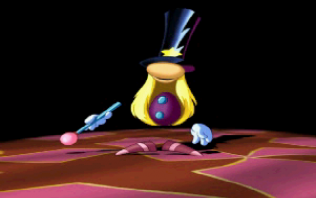 The Magician's first appearance in Rayman

Being part of the same limbless species as Rayman, the Magician bears the signature traits – lack of limbs, large nose and white gloves. He has long blonde hair that nearly reaches the ground, and his eyes are always covered by his long black top hat, which shines in blue and purple and has a gold star on the front. He has also been seen wearing shirts of two colours – in the introduction sequence of Rayman, he wears a purple shirt with two blue buttons, but in the game itself, this is blue with golden buttons. The colour of his shoes – purple and orchid – remain the same, but with different stripe patterns. He is also noticeably shorter than Rayman is in Rayman, but in the educational games, he is approximately the same height as Betilla the Fairy. According to English with Rayman, the Magician has a cousin named Andrew.

The Magician first appears in the introduction of Rayman, in which he tells the story of how Mr Dark stole the Great Protoon and brought about the collapse of the valley's natural stability. He calls on Rayman to go and free the Electoons from the cages that hostile beings had imprisoned them in, as well as bring the Great Protoon back from the Candy Château.

Rayman can come across the Magician's hat several times throughout the game. The Magician only emerges from it if Rayman has at least ten Tings; if not, he will clearly indicate with his hand that the hero will need them. If Rayman does have at least ten Tings, he automatically reaches out and drops them into the Magician's outstretched hand. The Magician then teleports Rayman to one of his bonus levels. In these secret areas, Rayman must collect all the Tings within the time limit. If he succeeds, he wins an extra life. Only a single life can be won in each bonus level. Subsequent victories in the same bonus levels are purely for fun, and also record the time taken by the player so that they can attempt to beat their records if they wish.

In several of the educational versions of the original game, such as Rayman Junior, the Magician's roles are looked into considerably more. He introduces the story of the game once again, only this time, he tells of how Mister Dark had broken into his cottage, stole the Great Book of Knowledge and destroyed the map to the villain's hideout. Once again, he and Betilla the Fairy call on Rayman to retrieve the pieces of the map and the book.

Instead of providing bonus areas, the Magician now helps Rayman to solve the many problems (spelling and mathematical problems for the young player) throughout the journey. When Rayman starts a level, the Magician will give him an overview of the specific tasks he needs to do in order to complete it. After that, his hat will appear several times, and each time Rayman passes one, the Magician will either ask a new question or remind him of the level's task. At the very end of the last stage in the level, he will appear somewhere once the final task is done, and when Rayman finds him, he mostly does a different performance, such as doing a dance or rapping 90's style, while praising Rayman for what he has done.

The Magician makes his first chronological appeareance in Rayman Origins. He's seen for the first time at the Snoring Tree's left door, where a guard protects the entrance to the Land of the Dead. His role in the game is different compared to Rayman 1 or 2. Here, he gives Rayman and his friends basic information about Lums and Skeleton Teeth when players jump on his hat. Also, he takes care of the electoons, keeping them in big transparent tubes, The player must collect as many lums as possible to fill a tube at the end of the level, and a certain amount of lums will unlock some electoon cages. The Magician was drastically redesigned as a teensy, and doesn't belong to rayman's species anymore, rendering Rayman himself unique.