Difference between revisions of "The Musician"

The Musician is a character who appears in the original Rayman game, Rayman Designer and Rayman Activity Centre, together with his family. He is of the same species as Rayman, and lives with his wife and child high in the Blue Mountains, where he spends his time playing on his guitar with his wife. He is a hippie, with curly brown hair held in a bandana and a brown beard, while his wife has long grey hair and wears green clothes. 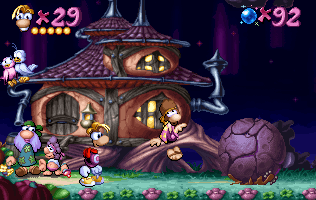 Rayman must carve a new guitar from a rock for the Musician.

In the original Rayman game, he appears in Mr Stone's Peaks where his guitar has been crushed under a rock. Rayman has to punch the rock a few times to carve a new guitar out of it. As a reward, the Musician gives him a bottle of blue and pink liquid which gives Rayman the Super Helicopter power. This allows him to fly with his helicopter.

In Rayman Designer, the Musician, along with his family, appear as scenery events in the Mountain world. 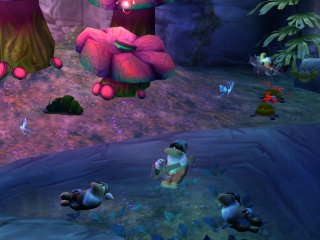 One of these garden Raygnomes has both a beard and a guitar, a possible reference to the Musician.

In Rayman 3, several garden Raygnomes – garden gnomes which resemble Rayman's species – can be seen scatttered throughout the first phase of the Fairy Council. Some of the garden Raygnomes have guitars and short beards, possibly as a reference to the Musician.