Tings are collectible items found in several games in the Rayman series. 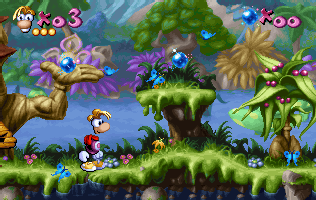 In the original Rayman game, Tings are small blue crystal balls found scattered in large numbers throughout almost every level, often leading Rayman to a hidden cage or to safety. Collecting a hundred Tings gets Rayman a bonus life and resets his Ting count to zero. If Rayman loses a life, he also loses all Tings he is currently holding. They are also apparently used as some kind of currency, as ten Tings need to be paid to the Magician in order to enter one of his bonus levels. There are 2143 of them in the original version of the game.

A Ting in the GBC version

In the Game Boy Color adaptation of the game, Tings play a much larger role in the story. Here they are revealed to be tiny fairies inside glassy spheres. These Tings wake Rayman up from his slumber at the beginning of the game to warn him of Mr Dark's plot, and continue to provide instruction throughout the duration of Rayman's adventure. They also grant him new powers at certain points in the game, essentially taking on the role Betilla the Fairy played in the original version. Only thirty Tings are needed to gain an extra life here, and none are required to enter a bonus level. There are only 1184 tings in this version of the game. 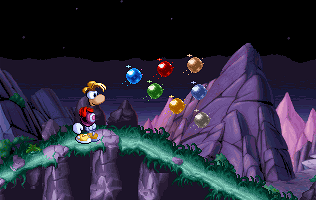 In Rayman Designer, there are Tings of various colours; collecting all Tings of a specific colour will trigger events. There are total of 2400 blue tings - 100 in each level - and if all have been collected, the exit will open up. Five of them - purple, green, bronze, silver and gold - are used to open up passages, while red tings are used to reveal a few extra lives.

In Rayman Junior, Betilla and the Magician refer to Tings as “Bubbles”. Only 50 needed to gain an extra life, howewer, this is the only way to get more of them. There are 2,273 of them. Some tings cannot be collected because in some levels throughout the game, wrong answers relate to them. 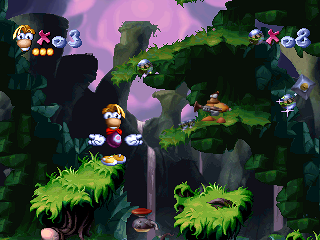 Tings as seen in the 2D prototype version of Rayman 2

In the 2D prototype version of Rayman 2, Tings are silvery and metallic; they reflect the colour of their surroundings. Tings are much rarer here, and only ten are required to earn an extra life.