Difference between revisions of "Tomb of the Ancients secret"

The Tomb of the Ancients secret refers to an unnamed secret area found in the Tomb of the Ancients in Rayman 2: The Great Escape. It is known to be accessible in the PC, Sega Dreamcast and the Nintendo 3DS versions of the game; in most other versions of the game, the secret is present, but there is no known way to access the area. In the Sega Dreamcast and Nintendo 3DS versions, three cheats are given to the player in the secret area. 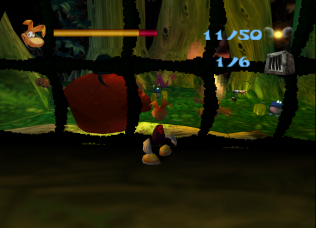 The clearing at the end of the tunnel 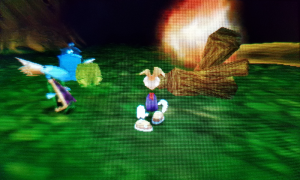 The entrance to the secret area in hidden in the final phase of the Tomb of the Ancients, outside the door to the Technical Check-up where Rayman fights Clark. In each version, the area can be accessed by pressing certain buttons or keys while Rayman is standing in front of the Technical Check-Up door. On the Dreamcast version, the button combination is "A, B, X, Y, X, Y", on the 3DS version, it is "B, Y, D-Pad Right, D-Pad Left, D-Pad Right and D-Pad Left" and on the PC version, typing "playjeff" will unlock the secret. If successful, a puff of dust will appear on Rayman's left and a wooden crate will materialise. Rayman can then climb onto the crate, and use it to reach a previously inaccessible tunnel whose entrance is hidden in the shadows high on the wall. The walls of the tunnel are decorated with the engraved coffins and skulls typical of the level. At the very end of the tunnel, Rayman encounters an impassable net, but the player is treated to a unique view: a small forested glade with a campfire at its centre lies beyond the net, and surrounding it are two baby Globoxes playing stones as if they were drums, a Grand Minimus dancing, and another large character (thought to be an early version of Clark, though his face is not visible) can be seen playing a guitar. The scene is very similar to the one shown during Rayman Revolution's end credits, which may have been based on it.

In the Nintendo 3DS version, the area itself is accessible. The net can be breached due to a glitch where you can get through the right corner of the net. It's a bit tricky, but you have to jump and roll a few times at it or try strafing towards the corner. Eventually Rayman will glitch through the corner of the net and fall into the secret area.

On the Dreamcast and 3DS versions, as Rayman makes his way through the tunnel, he will come across three Robo-Pirate signs, one after another, each bearing a different message. The first sign says ‘To gain life points, try to shoot on a bridge’, the second says ‘To gain 3 Mega-Shoots, try to jump under a well’, and the third says ‘To recover full life, try to push a tree’. Each of three messages Rayman reads as he makes his way through the secret tunnel in the Tomb of the Ancients is in fact a cryptic clue to one of three cheat codes which Rayman can activate in various locations throughout the game. It is not necessary to enter the secret area and read the messages in order to use these cheats; however, they only function in the Sega Dreamcast version of the game and its derivatives, the Nintendo 3DS and iOS versions. In the iOS version, this area cannot be accessed due to the lack of buttons, but the cheats function properly. The words do not flash across the screen when these cheats are used in the iOS version.

The first message, ‘To gain life points, try to shoot on a bridge’, was mixed up with the second one. The first message should read, ‘To gain life points, try to jump on a bridge’. If the player goes to one of the many bridges in the game and jumps up and down on it, the word ‘Fahrenheit’ will flash across the screen and Rayman's health bar will refill – the same effect as the one provided by the ‘Pickwitt’ cheat. The name ‘Fahrenheit’ is probably a visual joke regarding the health bar's resemblance to a thermometer.

The second message, ‘To gain 3 Mega-Shoots, try to jump under a well, was mixed up with the first one. The second message should read, ‘To gain 3 Mega-Shoots, try to shoot under a well’. If Rayman goes to the bottom of one of the many vertical passageways throughout the game and starts shooting with his magic fist, the word ‘Gauntlet’ will flash across the screen, and Rayman will be given three Power Fists. The name ‘Gauntlet’ is a reference to the Power Fists, and draws a comparison between them and hand armour.

The third message, unlike the first two, does not contain any mistakes. ‘To recover full life, try to push a tree’ is self-explanatory: if Rayman walks up to one of the many trees littered throughout the game and presses himself against it, the word ‘Pickwitt’ will flash across the screen and his health bar will refill – the same effect as that of the ‘Fahrenheit’ cheat. ‘Pickwitt’ is not a word, and the reason it was used as a name for this cheat is unclear. It requires 900 Yellow Lums to reveal this secret.