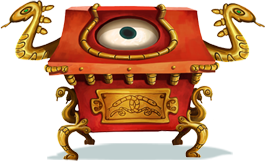 Tricky Treasures are chest-like creatures that appear in Rayman Origins. They guard Skull Teeth inside their bodies, and to unlock the levels where they hide, the Flaming Teensy tells the heroes to find a certain number of Electoons. Finding all of the Tricky Treasures is necessary to reach the Land of the Livid Dead. 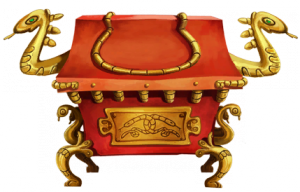 The Tricky Treasures, like they appear in Rayman Legends

When the heroes come close to a Tricky Treasures, it starts imagining what's going to happen (A doodle of Rayman punching the doodle of a chest appears), and fearful runs away, as the heroes must run after it to finally break it at the end of the path. The Tricky Treasures levels feature some of the most challenging levels in the game, as the players must run through almost random obstacles, such as dangerous spiky elements, strong winds, collapsing platforms, enemies and pits.