Difference between revisions of "Twilight Gulch"

Twilight Gulch (French: Le Ravin du Crépuscule – The Ravine of Twilight) is the first level of the Blue Mountains, the third world in the original Rayman game. It follows Allegro Presto and is followed by The Hard Rocks. It consists of two parts the first time it is visited, and only one during subsequent visits, as in the second part, Rayman is chased by Mr Stone.

It is one of the only levels in which all six cages can be found, along with the first part of Mr Sax's Hullaballoo and the first part of Mr Skops' Stalactites. It is a short level in which Rayman discovers his new enemies. In order to proceed in this level, Rayman must first gain the grappling fist in Moskito's Nest. 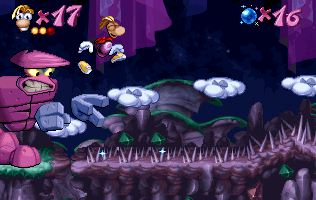 Rayman is pursued by Mr Stone

After having encountered a large number of stone dogs, Rayman is chased by Mr Stone. He shelters in a crevasse, and when he gets out of it, he is chased again and then finds another shelter. After a few impatient steps, Mr Stone exits the area, leaving Rayman to complete the level.