Difference between revisions of "Types of Rabbids"

Rabbids aren't all identical, as there are a couple of specimens which have different characteristics than others. While most of them usually just differ in their clothing, there are some which differ in shape and size as well. The most unusual bunny of them all is the Sergueï, a giant, metal muzzle-wearing rabbit with red glowing eyes. It appears to be the leader (or at least main henchman) of the bunnies and it is the one responsible for throwing Rayman in jail, appearing as a guard of some sort. Another different bunny called Pink, a robotic bunny, has large, long ears and big glowing eyes. He is seen in the "Bunny Hunt" mini games with some sort of vehicle having four legs, and is the final enemy fought in the first game. The Rabbids also seem to have a larger breed, which have a considerably lower voice and appear in a darker, gray color. They mostly appear in the on-rail segments, and require multiple plungers to subdue.

The "normal" Rabbids appear in a variety of getups. These are listed below: 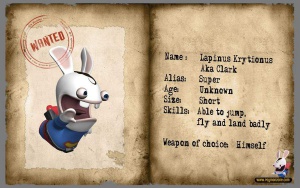 There are several Rabbids that have special traits. 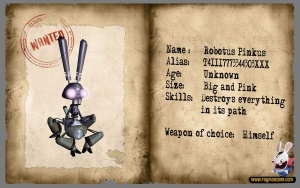 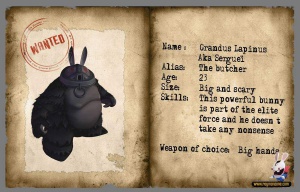