Rayman’s fists turn into a whirlwind. You can make anything spin (driving it to distraction): a mushroom, a Hoodlum, or any other object or animal.
—Manual, Rayman 3: Hoodlum Havoc 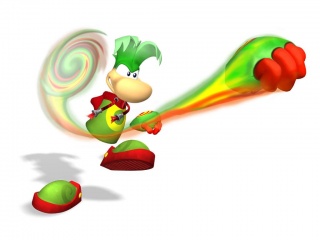 Rayman's appeareance with the power of the Vortex

The Vortex is a temporary power used on several occasions by Rayman in Rayman 3 and provided by the Laser-Washing Powder green cans. When Rayman acquires this power, the symbol of his chest turns yellow, his hair, torso, shoes and a great part of his gloves turn green, and the base of his shoes, hood and fingers turn red. With this power Rayman wears a pair of special gloves with red and yellow spiral symbols that allow him to throw small tornadoes that can shrink his opponents and lower the Meadowscrews to access to high places. Using the power of the Vortex is one of the two ways to make Stumblebooms fall off their stilts, the second one being to get other Hoodbooms to destroy the stilts with plum juice jugs. The Vortex is the first laser-washing powder can that Rayman finds in the game when beating André in his Hoodblaster costume while he is distracted by Murfy in the Fairy Council. Its effect lasts 25 seconds, and it is the second most lasting power in the game, the Lockjaw being the first one.