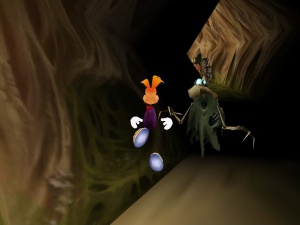 A Zombie Chicken is an enemy found in the gloomier parts of the world in Rayman 2. They can also be seen in the Game Boy Advance version of Rayman 3 and as well as very briefly in the console versions. More ghostly versions can also be seen floating around in the First Ruins track in Rayman M. They are the result of hens laying dead eggs out of terror from the events caused by the Robo-Pirates.

They have slightly deformed chicken beaks with cartoony eyes and gray-brown feathers on their heads. They wear long, ripped, brown cloaks and their arms look like human skeleton ones that are bent in a haunting way.

There are two different kinds of Zombie Chickens in the PC version of Rayman 2.

Both kinds can be found in the Tomb of the Ancients

When the Robo-Pirates arrived, the hens were so terrified they laid eggs which contained Zombie Chickens.

They appeared in Rayman 2 in the swamp levels, appearing from the ground or swamp water and floating towards you to hurt you. They appear again with the same roles in the portable versions of Rayman 2 and Rayman 3. They reappeared in Rayman 3: Hoodlum Havoc as more ghostly creatures in the Desert of the Knaaren, and make you drop eggs you had to carry somewhere. They also had their own frightening sounding theme whenever a bunch of them appeared, making them more creepier than before.