From RayWiki, the Rayman wiki
(Redirected from Rayman Zone)
Jump to navigation Jump to search

This article is about the website. For the magazine, see Rayman Zone (magazine).

RaymanZone, also spelt Rayman Zone, and commonly abbreviated RZ, was the official Rayman website from January 2003 to June 2010, after which it was replaced with the official Rayman Origins blog. However, this term mainly refers to its still existing forum, which is known to have been the stage of several unfair bans, as well as numerous attacks (including six full deletions) since it was created.

The different periods of its history are usually referred as eras, separated from each other by a full deletion of the forum. 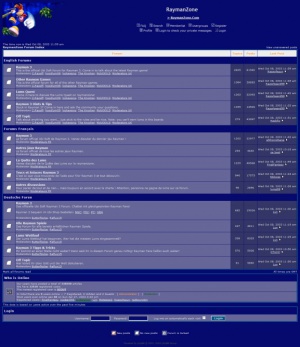 The RaymanZone forums on October 8th 2003

A banner of the forum

The forums were created in January 2003 and used the phpBB software. They featured three categories: an English, a French and a German section. They were characterized by a high frequentation, but also by inactive administrators and unfair bans. Despite the rumours of a group of skilled revengeful members already responsible for numerous spam attacks, which were largely disregarded, the system version was never updated and it resulted in the first deletion of RZ on December 20, 2004. This attack was soon proved to have been performed by the Anti RaymanZone Organization, commonly abbreviated ARZO, who sent a webworm to exploit a security issue. They claimed to have been unfairly banned from the forums and wanted to take their revenge. Pirate-Community was falsely accused of being linked to ARZO, as it was created by Hunchman801 in August 2003 after he was also unfairly banned from RaymanZone.

The first era was by far the most prolific period of RaymanZone. It is estimated that it reached more than 400,000 messages, which was only beaten by Pirate-Community in 2009.

After several months of absence, the forums were created again from scratch in May 2005, but they were merged with the Ubisoft forums, powered by the Infopop software. This decision was highly criticised, but a certain number of users stayed, in hope of reconstructing their community, while others joined Pirate-Community. On July 3, 2006, an attack performed by ARZO caused a hard disk to break, resulting in the loss of two days of posts for the whole Ubi forums. Then, in July and August, the English forums were repeatedly spammed, until they were entirely deleted by the Kill RaymanZone Klan, commonly abbreviated KRZK, a small group of ARZO die-hard members, on August 24, 2006. Those spam attacks were later proved to be a cover for a graduated deletion which purpose was to render any backups useless.

During the second era, it is estimated that more than 60,000 messages were posted on the English forums.

The English forums started from scratch for the second time, and several members left because of the lack of action from Ubisoft. On January 20, 2007, an unidentified problem resulted in the loss of three months of posts, but the KRZK never claimed to be responsible for this. The forums were however deleted by the KRZK for the third time on March 3, 2007.

It is estimated that less than 20,000 messages were posted during the third era.

The English forums were deleted by the KRZK for the fourth time on January 27, 2008.

It is estimated that less than 15,000 messages were posted during the fourth era.

On April 10, 2008, RaymanZone was heavily flooded with explicit pictures. Then, only four months after the last deletion, the English forums were deleted again by the KRZK for the fifth time on May 2, 2008.

It is estimated that less than 2,000 messages were posted during the fifth era.

It is estimated that less than 3,000 messages were posted during the sixth era.

The last deletion marked the end of the presence of a community on the forums and that of any substantial activity. So far, about 12,000 messages were posted on the English forums during the seventh era. The French forums, which were never deleted since the beginning of the second era, now contain about 6,000 messages.

In late 2009 and early 2010, an independent hacker or group of hackers repeatedly flooded the boards with pornographic material.

In 2010, the boards were redecorated to suit the announcement of Rayman Origins.

At the beginning of 2012, the Ubi forums were transferred from the Infopop/Groupee/Social Strata service to a new vBulletin-powered host. In this process, the German Rayman forum was permanently deleted.

To promote the then upcoming Rayman Origins and the Rayman 3 HD remake, Ubisoft opened a YouTube channel named after RaymanZone, it was seemingly abandoned in March 2012, and has not received any new videos or updates since.

The forums were again redecorated for Rayman Legends in 2013, marking the end of the use of the name "RaymanZone".