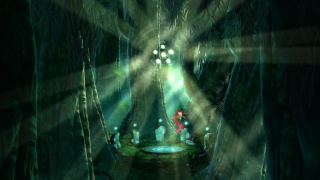 The nymphs create Rayman to combat the First Bad Dream

The First Bad Dream was a legendary incident that occurred early in the history of the Glade of Dreams and led to the creation of Rayman.

The Glade was a world created through the dreams of the god Polokus, also known as the Bubble Dreamer: a being so powerful that his every thought and desire became reality. The stuff of Polokus's dreams are the small pink creatures known as Electoons. Unfortunately Polokus's nightmares can also take on a life of their own. One day, Polokus suffered his first bad dream, and begot a foul and ferocious creature that had never been seen before: Jano. This monster spawned hundreds of Antitoons of all shapes and sizes – these creatures are the stuff of nightmares, and the opposite of Electoons. Soon the Glade of Dreams was overrun by them.

In order to restore balance to their world, the nymphs, led by their eldest sister Betilla, gathered together to invoke a being who could save the world: ‘a creature both agile and carefree, as tenacious as he is hilarious, destined to crack up the Creator with his heroic antics and stop the nightmare!’ Unfortunately the nymphs were distracted by some Zombie Chickens on the way to the ritual, and lost a sack of Lums while chasing them over a cliff. Thus, they arrived late and with a lot less illumination. As a result, Rayman was born missing several body parts – arms, legs and a neck.

Rayman's first adventure ensued. Exactly what happened is not known, but it can be presumed that Rayman defeated Jano and his army of Antitoons. Jano then became the Guardian of the Cave of Bad Dreams, a subterranean grotto where Polokus's nightmares were imprisoned. Later on, the Great Protoon was stolen by an evil sorcerer known as Mr Dark, and the Magician tasked Rayman with saving the world once again, leading to the events of the original Rayman game.