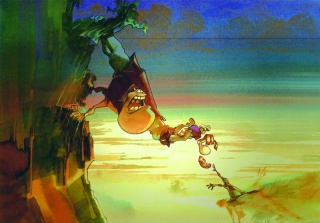 Globs is rescued by Clark and Rayman.[1]

Globs is a baby Globox mentioned in one of the Report N° 20Z stories on the official Rayman 2 website. Several seasons before the Robo-Pirate invasion, Globs ran into trouble and was rescued by Rayman and Clark, who then fought and defeated a gang of Zombie Chickens. At this time, Globs is said to be one of the 35 sons of Globox and Uglette, although Rayman 2 indicates that they have over 650 children, including hundreds of sons. It is not clear if the other baby Globoxes were born during the intervening seasons, or if the developers simply changed their number. It is not known if Globs actually appears in Rayman 2, which features hundreds of unnamed baby Globoxes.