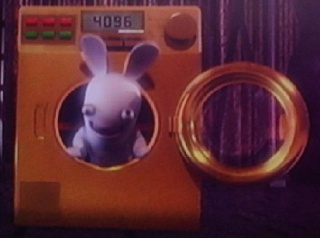 The Golden Time Washing Machine travels to the future

‘And by the way, there's also an old broken golden washing machine, a work of ART in its own right. Heed no attention to it. No one has any idea what is doing here.’ — Professor Albert Einequen's quote in Raving Rabbids Travel in Time's manual in the Trophy Hall section.

The Golden Time Washing Machine is a machine with the same functions and look as a regular Time Washing Machine in Raving Rabbids Travel In Time, except it is entirely made of gold and it travels to the future. It is exposed in the center of the Trophy Hall, in the subterraneum floor of the Main Hall from the Museum and it is only accessible after completing with a Rabbid symbol in every mini-game from the Bouncearium, Shootarium, Flyarium and the Runarium rooms. By interacting with the unlocked area of the Golden Time Washing Machine the ending cutscene of the game is triggered and the last two mini-games from the Hookarium room are unlocked.