From RayWiki, the Rayman wiki
(Redirected from Otto)
Jump to navigation Jump to search 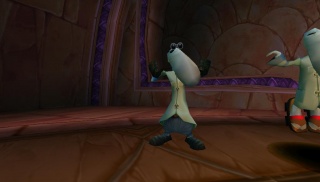 Otto Psi in the Longest Shortcut.

We will need to resort to drastic measures!
—Otto Psi, Rayman 3

Otto Psi, also known as Kal Ory, is the first of the three Teensie doctors whom Globox has to see in Rayman 3. His names are puns on the words ‘autopsy’ and ‘calory’. He examplifies a German stereotype, with small glasses and a strong German accent. His office is located in the Clearleaf Forest.

When Rayman reaches the Heart of the World he discovers that Globox has swallowed André, the leader of the Black Lums. The Grand Minimus command Rayman to take Globox to the Doctor in Clearleaf Forest, the first mention of Otto. Rayman and Globox travel to Clearleaf Forest and battle Hoodlums and Master Kaag on their way to find him.

When Rayman and Globox reach Otto's office they find it overrun by Hoodlums. Once they are overcome Globox enters the surgery and meets Otto. From strumming Globox's arm, Otto is able to work out the problems and resorts to "drastic measures", playing a guitar solo until Globox belches and sends him flying.

Otto realizes that the problem is worse than he thought and advises that Rayman and Globox seek out Roméo Patti. He sends them to the Land of the Livid Dead, telling them that he must go and clean his instruments.

At the Desert of the Knaaren, Rayman and Globox meet the third doctor Gonzo who is also unable to get André out of Globox. However, he calls upon Roméo and Otto to help, and the three doctors work together and manage to free André, who then escapes. Otto is concerned about this, stating that all is lost if André finds the energy to multiply.

At the Longest Shortcut, Otto informs Rayman and Globox that Reflux and André have joined forces and stolen Gumsi's sceptre. Along with the other three doctors, he seems to believe that the shortcut will help Rayman and Globox reach André and Reflux, although it does not appear to help at all. He then leaves with Romeo and Gonzo.

At the end of the Longest Shortcut, Otto tells Rayman and Globox that Reflux and André have escaped. He and the other doctors give the duo a boat to follow them in. Neither Otto nor his peers are seen again.