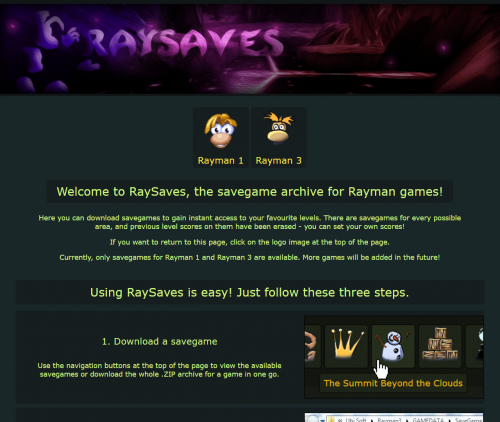 RaySaves is an official Pirate-Community affiliated website founded by RoboticTeensie on 21st April 2013[1]. It currently hosts save games for the PC versions of Rayman and Rayman 3, these save games have been modified to ensure that there is no standing progress made, and as such, the saves are at 0% completion where possible.

The idea to develop a Rayman save game archive was conceived when RoboticTeensie found that he was able to delete level scores in Rayman 3[2], this gave rise to the possibility of being able to start at any level of the game, and not having to deal with progress being already made or being forced to progress to reach a certain part.

The idea was met with encouragement, and work began onto making it an archive. RaySaves was first unveiled with Rayman 3 save games on 21st April 2013, at the time, it was hosted on an external server, until it could be transferred to the Pirate-Community servers. In the meantime, a new project for archiving Rayman saves was conceived, and was undertaken and contributed to by many Pirate-Community members. The Rayman saves were made accessible to the public on May 6th 2013[3].

Due to the server issues that Pirate-Community had been host to, RaySaves remained externally hosted for many months. When the issues were resolved, RoboticTeensie had not been heard from for some time. In the end, the facility was finally transferred to Pirate-Community on February 8th 2014[4], and has been managed by user RibShark since February 21st 2014.