Rayman Junior (also known as Rayman Brain Games in the United States, כיף ללמוד עם ריימן in Israel, Rayman Uczy Matmy i Polaka in Poland and Maths & English with Rayman in other regions) is an educational video game based on the original Rayman that was designed to teach children aged 6-8 years old the basics of mathematics and literacy. Many variations of the game are known to have been released for MS-DOS starting from 1996, with the Sony PlayStation version being released in 2000.

1. When the demos play in Rayman Brain Games, they don't play Rayman's 2D theme music, but in Amazing Learning Games with Rayman and Rayman Junior, it does play.

2. In Rayman Brain Games, the music for Butterweed Bog plays in Rising Tides.

3. In Rayman Junior, Amazing Learning Games with Rayman and Rayman Brain Games, the music for Tasty Chase is heard in Mr Dark's Lair. The music that is really supposed to be playing on this level is that from the menu of the original Rayman.

5. In Rayman Brain Games, there's a glitch that causes life statues to not appear at all in the game.

“Happiness abounds in Rayman's World. The sun shines brightly, the plants are green and the clear water of the river bubbles and sings merrily as it flows.

But one day, the evil Mister Dark breaks into the Wizard's cottage, destroying everything in his wake, and steals Book of Knowledge and the map to this secret hideout that Rayman gave to the Wizard! Now the world will be at the mercy of the evil Mr Dark! So the Wizard and Betilla call for the one person who can save the world and return it to its former happiness and beauty. They call for Rayman!!! 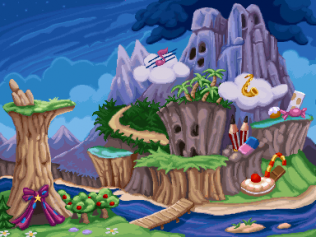 The world map, as it appears in Rayman Junior.