The Swamps of Forgetfulness

From RayWiki, the Rayman wiki
(Redirected from Swamps of Forgetfulness)
Jump to navigation Jump to search

The Swamps of Forgetfulness (French: Les Marais de l'Oubli – The Marshes of Oblivion) is the third level of the Dream Forest, the first world of the original Rayman game. It always consists of three parts. Besides the PC version and its ports, this is the first level in which all of the cages are possible to break without backtracking. In the Atari Jaguar version, this level is known as the Forgotten Swamps.

In the first part of this level, Rayman meets his jungle counterpart, Tarayzan, who is hiding behind a bush with his loincloth hanging over him. When Rayman knocks it down, Tarayzan gives him the magic seed, which temporarily replaces Rayman's grimace, and the level starts to flood. He must then use the seed to plant huge flowers which will help him reach higher platforms in order to escape from drowning in the flood. 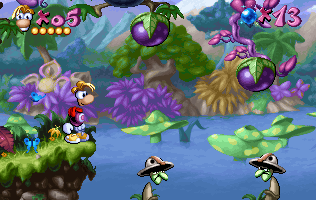 These Livingstones will prove to be useful.

In this short level, plums are very useful in terms of finding the cages that appear here. 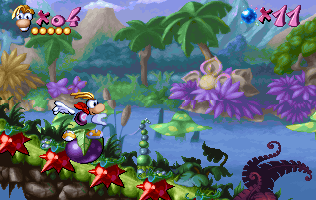 Rayman must use a plum to go through a field of spiky fruits.

Excluding the PlayStation and Sega Saturn versions, one of the cages is impossible to reach without the helicopter power, which will be acquired in Allegro Presto.