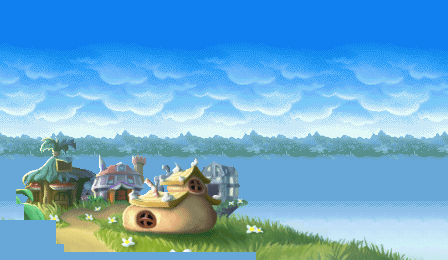 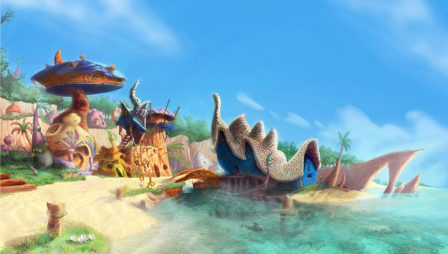 The village is a location found in the Game Boy Advance version of Rayman Raving Rabbids. It is the game's chief hub level – from it, the game's five worlds can be accessed.

The village is first seen in the short video which plays before the game's title screen is shown. It is a small group of five huts and one arch, gathered together in a grassy, hilly area. The background strongly resembles one of the backgrounds from the Dream Forest in the original game. Rayman himself is first transported to the village by Ly, after he defeats Pink's mechanical Antitoon boss in the underground Rabbid dungeons which form the game's prologue level. When Rayman first arrives, only one of the huts' doors is open. Inside is a Spiral Door, which leads to the Child world. Once Rayman completes all of the Child world's levels and defeats its boss, the door of the second hut opens, and Rayman can enter it to access the Forest world. The village becomes brighter and the weather more pleasant with each defeated boss, and the background music gradually becomes more optimistic. This pattern continues until Rayman has completed the Child world, the Forest world, the Organic Caves, the Sweets world and the Dark world. In addition to these five world-huts, the village also contains an arch, carved with a Rabbid's features. Its purpose is unknown, though it may simply be the entrance to the village.